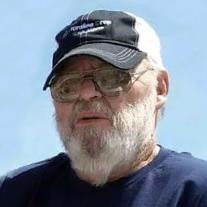 Jerry McClain, age 71, of Garretson, South Dakota, died on Saturday, August 24, 2019, with family by his side at his home in Garretson. Funeral Services will be 10:30 a.m. Tuesday, August 27, 2019, at the Hamilton Funeral Home in Marshall. Following a reception, interment will be in the Sacred Heart City Cemetery. Visitation will be held one hour prior to the service on Tuesday, from 9:30 – 10:30 a.m. at the Hamilton Funeral Home. Jerry Leo McClain was born January 20, 1948, to Jacob Howard and Dorothy (Hostetler) McClain in Marshall, Minnesota. He grew up in Marshall and was baptized as an infant and confirmed in his youth at First Lutheran Church in Marshall. Jerry attended school in Marshall, graduating with the class of 1966. He then began working at Bisbee Plumbing and Heating. On January 6, 1973, Jerry was married to Beverly Kruckman at St. Stephen Lutheran Church in Marshall, Minnesota. The couple spent over 46 years of marriage together and had three children: Tammy, Brian, and Angela. They made their home in Valley Springs and then Garretson, South Dakota while Jerry drove for over 27 years with Walnut Grove Products – servicing Marshall, Luverne and Sioux Falls. He also owned and operated a sawmill and craft shop in Garretson where he lived out his passion of working with wood. Jerry was a member of Zion Lutheran Church in Garretson and active in the Garretson Muzzleloader Club. The family enjoyed traveling in the motorhome and Jerry was content doing anything outdoors – especially hunting and fishing. He loved spending time with his grandchildren, building those relationships, telling the most memorable and vivid stories, and flashing his unforgettable smile. Jerry died August 24, 2019, at the age of 71 years, 7 months, and 4 days. Blessed be his memory. He is survived by his loving wife, Beverly McClain of Garretson, South Dakota; children, Tammy (and Michael) Burke of Rapid City, South Dakota, Brian McClain of Garretson, South Dakota, Angela (and Scott) Perkins of Sioux Falls, South Dakota; four grandchildren, Alexander Perkins, Emily Burke, Colin Perkins, Alyssa Burke; great-grandson, Carson Perkins-Morrison; siblings, Milo (and Diane) McClain of Lynd, Richard McClain of Marshall, Judy (and Dennis) Eischens of Canby; siblings-in-law, Betty Jensen of Madison, South Dakota, Jane (and Greg) Flinn of Montevideo, Harold (and Diane) Kruckman of Montevideo; many nieces, nephews, other relatives, and friends. Jerry was preceded in death by his parents, Jacob and Dorothy McClain; brother, Robert (Shirley) McClain; parents-in-law, Bernice and Albert Kruckman; siblings-in-law, Albert “Sonny” Kruckman, William “Bill” Kruckman, and Rose Haase. The family invites attendees to a luncheon reception following the service at the Hamilton Funeral Home.

Jerry McClain, age 71, of Garretson, South Dakota, died on Saturday, August 24, 2019, with family by his side at his home in Garretson. Funeral Services will be 10:30 a.m. Tuesday, August 27, 2019, at the Hamilton Funeral Home in Marshall.... View Obituary & Service Information

The family of Jerry Leo McClain created this Life Tributes page to make it easy to share your memories.

Send flowers to the McClain family.