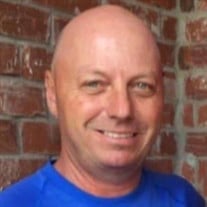 Gerald “Jerry” Sanderson, age 55, of Russell, Minnesota, died unexpectedly in his home on Tuesday, July 7th, 2020. A Private Memorial Service is scheduled for Saturday, July 18th, 2020 at Hamilton Funeral Home in Marshall, Minnesota. Public Visitation will be from 1:00 p.m. - 3:00 p.m. Jerry had the brightest smile and the loudest laugh in the room. You could often find him spending time with friends and family, grilling outside, watching Food Network and talking about his children. Jerry Jens Sanderson was born on September 27th, 1964 in Balaton, Minnesota, to Wilfred and Norma (Mikkelsen) Sanderson. He grew up and attended school in Balaton where he played football and basketball. He was confirmed at the Danebod Lutheran Church in Tyler, Minnesota. After high school he entered the workforce for a couple of years, then proudly enlisted in the National Guard and took several classes at Southwest State University. In 1996, Jerry married LeAnn (Johnson) Sanderson, gaining a stepson, Spencer Kor. Together, Jerry and LeAnn had three daughters; Corbin in 1997, Jada in 2000, and Alayna in 2004. Jerry ran a successful drywall company in the Minneapolis Metro for several years. In 2014 he moved back to his hometown area and most recently resided in Russell, Minnesota. In addition to being a proud father, Jerry was a talented cook; famous for his barbeque ribs. He was an exceptional athlete who taught his stepson and nephews the fade-away jumper. Jerry played on several softball leagues throughout the years; he was fast as lightening. Everyone who knew him knew he was a talented contractor and handyman and helped anyone who needed it. He loved classic rock music and played a mean air guitar to Mötley Crüe. Jerry loved telling stories, especially the ones that included people telling him he looked like Kenny Chesney. Jerry Sanderson died on July 7th, 2020 in Russell, Minnesota, at the age of 55 years. Blessed be his memory. He is survived by 3 daughters, Corbin, Jada and Alayna Sanderson of Yukon, Oklahoma; stepson, Spencer and his wife Brooke (Wyffles) Kor of Lynd; granddaughters, Jayden Wyffels and Oaklynn Kor; brothers, Mike and his wife Audie (Williams) Sanderson of Russell, Craig Sanderson of Balaton, Cal Sanderson of Madison, WI, Wayne and his wife Janice (Kleinsasser) Sanderson of Glencoe; his father, Wilfred Sanderson of Balaton; and many nieces, nephews, other relatives and friends. He is preceded in death by his mother, Norma (Mikkelsen) Sanderson, his grandparents Louis and Alma Sanderson and Jens and Clara Mikkelsen, and several aunts and uncles.

The family of Jerry Jens Sanderson created this Life Tributes page to make it easy to share your memories.

Send flowers to the Sanderson family.