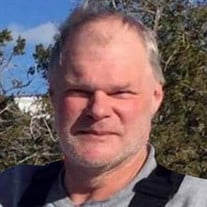 Jerry Zollner, age 58, of Lucan, Minnesota, died on Sunday, November 7, 2021, at the Avera Marshall Regional Medical Center in Marshall. Private Interment will take place at a later date at the St. Anne’s Catholic Cemetery in Wabasso, Minnesota. In lieu of flowers, memorials are preferred to the family and can be sent to the care of Hamilton Funeral Home in Marshall. Jerome “Jerry” Michael Zollner was born October 28, 1963, in Marshall, Minnesota, to parents Dennis and Judith (Redding) Zollner. He grew up in Wabasso, Minnesota, and was baptized, received his first communion, and was confirmed at Saint Anne's Catholic Church. Jerry attended the Wabasso High School, graduating with the class of 1982, before going on to farm and work with his family in their snowmobile business until 1999. On January 26, 1985, Jerry was united in marriage to Jane Weber at the Holy Redeemer Catholic Church in Marshall. They lived on various farms near Wabasso and raised two children. Years later, Jerry began driving truck for Cliff Viessman Trucking and spent another 20+ years behind the wheel prior to his passing. Jerry enjoyed snowmobiling and taking many trips out west with family and friends. Going “up North” was an annual event each winter. He also enjoyed sprint car racing and watching his son, Andrew, race his quad four-wheeler. After years of dealing with various medical issues, Jerry died on Sunday, November 7, 2021, in Marshall, just 10 days after his 58th birthday. Blessed and eternal be his memory. Jerry is survived by his two children, Brittany (and Michael) Abrego of St. Cloud, Andrew Zollner of Lucan; mother of his children, Jane Zollner of Marshall; 4 siblings, Kimberly (Wally) VanKeulen of Marshall, Paula (Bob) Geistfeld of Wood Lake, Valerie Wyffels of Webster, SD, and Dean (Jenny) Zollner of Wabasso; many nephews, nieces, other relatives, and friends. Jerry was preceded in death by his father, Dennis Zollner, mother, Judy Hansen, and stepfather, Kenny Hansen.

The family of Jerry Michael Zollner created this Life Tributes page to make it easy to share your memories.

Send flowers to the Zollner family.