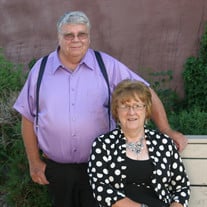 Jim and Cathy Hively, age 75 and 71, of rural Russell, died Thursday, April 30, 2015, at their home. Memorial services are 11:00 AM Tuesday, May 5, 2015, at the Victory Christian Church in Balaton. Private family interment will follow in the Russell City Cemetery at a later date. Visitation will be from 4:00 – 8:00 PM Monday, May 4, 2015 at the Victory Christian Church in Balaton with a prayer service scheduled for 7:00 PM. Visitation will continue one hour prior to the service, from 10:00 – 11:00 AM, on Tuesday at the church. Clergy Officiating: Rev. Doug Wing Special Music: Crystalynn Larsen ~ “On Eagle’s Wings” “Our God Is An Awesome God” and “Amazing Grace (My Chains Are Gone)” by Chris Tomlin Active Urn Bearers: Zachariah, Jeremiah, Amariah, and Kayla McCarthy, Jordan, Jared, Jacob, Justin Hively Honorary Urn Bearers: Chase McCarthy, Westen Hively, Connor Hively James Donald Hively was born July 9, 1939, in Tracy, Minnesota. He was the son of Donald and Vera (Giles) Hively. Jim was baptized and confirmed at the Presbyterian Church in Russell. He attended school in Russell and graduated with the class of 1957. He served his country in the United States Army, stationed in Hawaii. Upon returning home, he went on to farm in rural Russell. Catherine Agnes Dirckx was born January 15, 1944, in Marshall, Minnesota. She was the daughter of Joseph and Agnes (Lenz) Dirckx. Cathy was baptized, received her first communion, and was confirmed at St. Eloi Catholic Church in Ghent, Minnesota. She attended school in Lynd and graduated from Lynd High School with the class of 1962. On March 31, 1962, Jim and Cathy were united in marriage at the Presbyterian Church in Russell. The couple farmed south of Russell and have been on their current place since 1970. In addition to farming, Jim drove truck for several people including Gravely Livestock. While being a dedicated homemaker and farm wife, Cathy owned and operated her own Upholstery business and also worked at Fabrics Plus in Marshall, did some cleaning, and odd jobs painting and wall-papering. They couple shared 53 years of marriage and had two children: Denise and Brad. They also cared for Corey Buchert and mentored him as if he were one of their own. The couple were faithful members of Grace Life Church in Marshall. Jim liked camping, campfires, and fishing. Cathy was always prayerful and enjoyed quilting gardening, her flower beds, and making mock angel food cake. They both lived for their grandchildren and great-grandchildren and never missed an opportunity to spend time with the family they loved so much. Jim and Cathy Hively entered their heavenly home on Thursday, April 30, 2015. Jim reached the age of 75 years, 9 months, and 21 days; Cathy reached the age of 71 years, 3 months, and 15 days. Blessed be their memory. Jim and Cathy are survived by their children, Denise (and Edward) McCarthy of Hastings, MN, Brad (and Teri) Hively of Balaton, MN; mentored as a son, Cory Buchert of Russell, MN; 8 grandchildren, Zachariah (and Jessie) McCarthy, Jeremiah McCarthy, Amariah McCarthy, Kayla McCarthy, Jordan (and Stephanie) Hively, Jared (and Jessica) Hively, Jacob Hively, Justin Hively; 3 great-grandchildren, Chase McCarthy, Westen Hively, Connor Hively; Jim’s sister, Jane (and Allen) Hansen of Russell, MN; Cathy’s siblings, Barbara (and Cecil) Claeys of Owatonna, MN, Dennis Dirckx of Marshall, MN, Gary (and Jean) Dirckx of Battle Lake, MN; Cathy’s in-laws, Carolyn Dirckx of Luck, WI, Wally Reesen of Arlington, MN, Barb Dirckx of Clarkfield, MN; nephews, nieces, other relatives and many friends. Jim and Cathy are preceded in death by his parents, Donald and Vera Hively; her parents, Joseph and Agnes Dirckx; infant daughter, Agnes Hively; and Cathy’s siblings, Tom Dirckx, JoAnn Reesen, and William Dirckx. The family invites everyone to the Balaton Community Center following the service for a luncheon.

Jim and Cathy Hively, age 75 and 71, of rural Russell, died Thursday, April 30, 2015, at their home. Memorial services are 11:00 AM Tuesday, May 5, 2015, at the Victory Christian Church in Balaton. Private family interment will follow in the... View Obituary & Service Information

The family of Jim & Cathy Hively created this Life Tributes page to make it easy to share your memories.