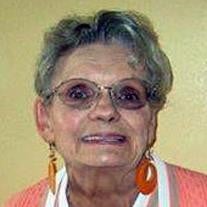 JoAnne Reynolds, age 73, of Marshall, Minnesota, died on Wednesday, June 20, 2018, at Avera Morningside Heights Care Center in Marshall, Minnesota. Memorial services will be held at a later date. JoAnne Florence Wierzchucki was born June 20, 1945, in Milwaukee, Wisconsin, to Leon and Dorothy (Nowell) Wierzchucki. JoAnne was baptized as in infant and confirmed in her youth in the Lutheran faith. She attended school in Fond du Lac, Wisconsin, and then worked as a bartender. She was married to Earl LeRoy Reynolds in 1969 and the couple had a son, Ronald. In 1973, the family moved to Brainerd, Minnesota, where JoAnne was a loving homemaker and mother. Following a divorce in 1980, JoAnne moved to the Twin Cities before moving to Marshall in 1995. JoAnne liked to spend her time on the computer, playing solitaire among other games. She was passionate about pet rescue and adoption and supported those efforts in Tracy, Minnesota. She is survived by her son, Ron Reynolds (Cheryl Anderson) of Minneota; grandchildren, Crystal Reynolds of Gaylord, Matthew Reynolds of Glencoe, Cheryl’s daughter, Brittney (Josh) Smith of Minneota; great-grandson, Brayden Reynolds; Cheryl’s grandchildren, Brooklyn and Landon Smith; Siblings, Lorraine (Gaylord) Wierzchucki of Covington, GA, Mike Wierzchucki of St. Louis, MO; nieces, nephews, other relatives, and friends. JoAnne was preceded in death by her parents; former husband; and brother, Ronald Wierzchucki. Blessed be her memory.

The family of JoAnne Florence Reynolds created this Life Tributes page to make it easy to share your memories.

Send flowers to the Reynolds family.