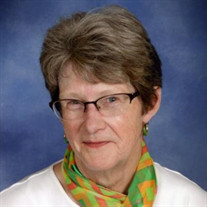 JoEllen Blomme, age 77, of Marshall, Minnesota, died on Friday, March 5, 2021, surrounded by her family, at her home. Memorial Services will be held at 11:00 a.m. Saturday, March 13, 2021, at the Hamilton Funeral Home in Marshall, Minnesota. Interment will be at a later date in the Long Lake Lutheran Cemetery near St. James, Minnesota. A walk-through visitation will be held just before the service, from 9:30 – 11:00 a.m. Saturday, March 13, 2021, at the Hamilton Funeral Home in Marshall. Occupancy limits and social distancing must be observed throughout all services. Masks are required at all public indoor gatherings. JoEllen Serena Syverson was born to Myron and Gilma (Oppegard) Syverson in Ormsby, Minnesota, on January 6, 1944. She attended school in Ormsby, New Ulm, Morris and then Marshall as her family moved around during her youth. It was during high school in Marshall that she met Mr. James Blomme and the two were united in marriage on November 4, 1961, at Holy Redeemer Catholic Church in Marshall. Jo and James lived in Marshall and had 5 children. Along with being a dedicated mother and homemaker, Jo worked at Ted’s Bar in Ghent before starting at Johnson’s Creative Corner (Marshall) in 1976. She spent over 30 year there and then worked at Fabrics Plus until her retirement at age 74. Jo was active in the Girl’s Camp Fire Program, serving in nearly every role over her 25 years there. She was a member of First Lutheran Church in Marshall and did some flowers and framing on the side for friends and neighbors. Jo enjoyed spending time with her family – often at the cabin on Lake Minnewaska, bowling league, canning, her flower gardens, and just sitting out on the deck to peacefully reflect. JoEllen Blomme died on Friday, March 5, 2021, in Marshall, Minnesota. She reached the age of 77 years, 1 month, and 27 days. Blessed be her memory. She is survived by her 5 children, Todd (and Deb) Blomme of Marshall, Tim (and Kathy) Blomme of Ghent, Tom (and Eileen) Blomme of Marshall, Tina (and Jeff) Nielsen of Marshall, Troy (and Rhonda) Blomme of Marshall; 13 grandchildren, Westley (and Tina) Blomme, Leiah (and Tim) Palmer, Trenton Blomme (Brandi Towne), Jeana (and Nick) Ziegler, Heather (and Paul) Rupp, Zachary (and Jenessa) Blomme, Braden Blomme, Amber (and Chayce) Chaffee, Brittney (and Jay) Olson, Samantha Nielsen, Courtni Nielsen, Wonder (and Samantha) Marczak, April Marczak; 16 great-grandchildren and 1 more in April; siblings, Gene Syverson of Livonia, MI, Karen McDaniel (Pat Blackmore) of Annandale, VA, Kent (and Jan) Syverson of East Dubuque, IL; nieces, nephews, other relatives, and friends. Jo was preceded in death by her parents Myron and Gilma Syverson; husband, James Blomme; and four siblings.

JoEllen Blomme, age 77, of Marshall, Minnesota, died on Friday, March 5, 2021, surrounded by her family, at her home. Memorial Services will be held at 11:00 a.m. Saturday, March 13, 2021, at the Hamilton Funeral Home in Marshall, Minnesota.... View Obituary & Service Information

The family of JoEllen Serena Blomme created this Life Tributes page to make it easy to share your memories.

Send flowers to the Blomme family.