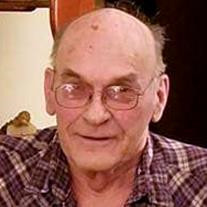 John Harry Blowers, age 76, of Marshall, Minnesota, died on Sunday, January 6, 2019, at Avera Morningside Heights Care Center in Marshall. Memorial Services will be 11:00 a.m. Monday, January 14, 2019, at St. Stephen Lutheran Church in Marshall. Interment will be at a later date. Visitation will be held from 4:00 – 7:00 p.m. Sunday, January 13, 2019, at St. Stephen Lutheran Church in Marshall. A prayer service is scheduled for 6:00 p.m. Visitation will continue one hour prior to the service, from 10:00 – 11:00 a.m., on Monday again at the church. John Harry Blowers was born October 4, 1942, to John and Florence (Sorenson) Blowers in Howard Lake, Minnesota. He grew up near Dunnell, Minnesota, and attended school there. John was baptized and confirmed at St. James Lutheran Church in Dunnell. He then graduated with the Sherburn High School, class of 1960, and went on to serve his country in the United States Army. Upon his honorable discharge, John returned home and began working construction with his father. On February 14, 1970, John was united in marriage to Rosemary Kirchberg at St. Michael Catholic Church in Madison, Minnesota. The couple made their home in Minneapolis and Franklin before settling in Marshall in 1976. That was the year John and Rosie bought an acreage in Marshall and began their business: JB Building Services. The couple still lived there having raised two children and sharing nearly 49 years of marriage together. John was a skilled carpenter and proud of his work and his business. Before retiring in 2015, John built about 450 apartments and houses, spanning from Red Wing, Minnesota, to Pierre, South Dakota. In the early 1980s the family even went to Trinidad to help and teach locals how to build their own homes. John and Rosie also owned and managed a 72-apartment complex in Marshall that he had built. His other enjoyments in life included watching westerns and football, reading books, and sharing his knowledge with his kids and grandkids. He also looked forward to having the granddogs visit. He will be dearly missed. John is survived by his loving wife, Rosie Blowers of Marshall; children, John Joseph (and Deb) Blowers of Marshall, Chris Blowers (and Jason Verke) of Marshall; grandchildren, John Austin Blowers (Ashley Durant), Dustin Blowers, Jamie (Amber) Unke, Kayla Strom, Haley Unke, and Alex Blowers; great-grandchildren, Felicity Wilson, Nicco Wilson; siblings, Dan (and Jean), Bob, and Tim (and Lois); aunts, nieces, nephews, other relatives and many friends. John was preceded in death by his parents, John and Florence Blowers, and son in infancy.

The family of John Harry Blowers created this Life Tributes page to make it easy to share your memories.

Send flowers to the Blowers family.