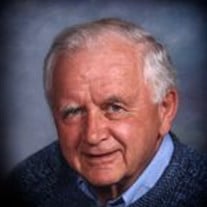 Anoka: John R. “Breck” Breckenridge (husband of Barbara Thomas), age 77, of Anoka, passed away at his residence in Marshall, MN on Wednesday, September 15, 2010. A memorial celebrating his life will be held at 2PM Saturday, September 25th at the United Methodist Church in Anoka. Burial will be in the National Cemetery at Fort Snelling. Visitation with the family will be one hour prior to the service. John Richard “Breck” Breckenridge was born to Sidney Park and Florence (Muetzel) Breckenridge on June 3, 1933 in Redwood Falls MN. He was baptized and confirmed at the Redwood Falls Methodist Church. On October 15, 1952 he entered the United States Army and served his country until he was honorably discharged on July 14, 1955. On September 6, 1958, Breck was united in marriage to Barbara Thomas at the Wesley United Methodist Church in Marshall. They lived in Minneapolis, Peoria IL, St. Paul, Columbia Heights, Anoka and now Marshall. While in Anoka he worked for Hoffman Engineering as a mechanical engineer until 1988 and also was a driver for the Minneapolis Auto Auction from 1989 to 1999. John’s enjoyments included outdoor activities, canoeing, biking, camping, tennis and volleyball, especially with his family. Breck passed away at his residence in Marshall on Wednesday, September 15, 2010. He had reached the age of 77 years, 3 months and 12 days. He is survived by his loving wife, Barbara of Marshall; four children, Cynthia (Jay) Cummings of Greenbelt MD, Cheryl (Andy) Stein of Melbourne FL, Nancy Breckenridge of San Francisco CA and Michael Breckenridge of Plymouth, MN; six grandchildren, Nyssa and Caitlin Cummings and Eric, Amy, Emily and Matthew Stein; two brothers, Gordon (Kaye) Breckenridge of Alpena, MI and Roger (Yoko) Breckenridge of Apple Valley, MN; his mother-in-law, Mildred Thomas of Marshall; also many other relatives and friends. He was preceded in death by his parents. Blessed Be The Memory Of John “Breck” Breckenridge Memorials preferred in lieu of flowers.

Anoka: John R. &#8220;Breck&#8221; Breckenridge (husband of Barbara Thomas), age 77, of Anoka, passed away at his residence in Marshall, MN on Wednesday, September 15, 2010. A memorial celebrating his life will be held at 2PM Saturday, September... View Obituary & Service Information

The family of John Richard Breckenridge created this Life Tributes page to make it easy to share your memories.

Send flowers to the Breckenridge family.