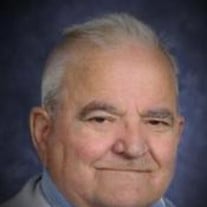 Cottonwood: John Van Heuveln, age 76, of Cottonwood, passed away Thursday, September 27, 2012 at the Minneota Manor. Mass of Christian Burial will be 11:00 A.M. Monday, October 1st at St. Mary’s Catholic Church in Cottonwood. Visitation will be 4:00 P.M. to 7:00 P.M. with a 7:00 P.M. prayer service Sunday at the Hamilton Funeral Home. Visitation will continue at the church on Monday, one hour prior to the mass. Burial will be in the church cemetery. Military honors will be provided by Cottonwood American Legion Post 503. Condolences may be sent to www.hamiltonfh.com. John was born on June 12, 1936 in Willmar, Minnesota to Joseph and Evelyn (Penn) Van Heuveln. He was raised around the Willmar and Raymond area. He joined the Navy where he finished high school requirements and was honorably discharged after three and a half years. As an adult, he was baptized, received First Communion and confirmed at Our Lady of Victory Catholic Church in Lucan. On November 30, 1957, John was united in marriage to Arlene F. Baune. John worked in building construction which took his family and him on many moves. He and his family settled in Cottonwood in 1970. He did construction and also drove truck to Viessman Trucking, retiring in 1998. John’s enjoyments in life were fishing, making fishing tackle, tinkering in the garage, bowling, and playing cards with his friends at the pool hall. John passed away at the Minneota Manor Care Center on Thursday, Septbember 27, 2012. He had reached the age of 76 years, 3 months and 15 days. He is survived by his loving wife, Arlene of Cottonwood; four children, Wendy, Kimberly, Kelly and Todd (Dawn)Van Heuveln all of Cottonwood; five grandchildren, Mitchell (Krystal) and Matthew Van Heuveln, and Kim, Josh and Meagan Ramos; a great grandson, Kollin Van Heuveln; brother, Joe (Valerie) Van Heuveln of Madison, SD: two sisters, Jody (Jay) Goldammer of Howard, SD, and Misty (Eric) Young of Arlington, SD; also nieces and nephews, Kayla, Gage, Alexis, Aubrey, Taylor and Ryker. He was preceded in death by his parents; son, Danny Lee; three infant siblings; and stepmother, Rosalie Van Heuveln. John was a member of St. Mary’s parish at the time of his death.

The family of John Van Heuveln created this Life Tributes page to make it easy to share your memories.

Send flowers to the Heuveln family.