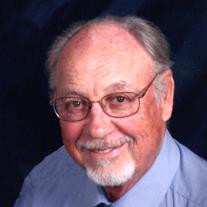 John “Jack” Lanners, age 73, of Marshall, Minnesota, passed away on Friday, September 15, 2017, at the Avera McKennan Hospital in Sioux Falls, South Dakota. A Celebration of Life will be at 10:30 a.m. Friday, September 22, 2017, at Cornerstone United Methodist Church in Marshall, Minnesota. Following a reception, interment will be in St. Edward Catholic Cemetery in Minneota. Visitation will be held from 4:00 – 8:00 p.m. Thursday, September 21, 2017, at Cornerstone United Methodist Church in Marshall. A prayer service is scheduled for 7:00 p.m. Visitation will continue one hour prior to the service, from 9:30 – 10:30 a.m., Friday at the church. John Edward Lanners was born on February 6, 1944, in Minneota, Minnesota. He was the son of Norbert and Elizabeth (DeSmet) Lanners. John “Jack” was baptized as an infant and received first communion in his youth at St. Edward’s Catholic Church in Minneota. He grew up near Minneota, and graduated from Minneota High School Class of 1962. Jack then enlisted in the United States Navy and served during the Vietnam War traveling on rescue missions. After his honorable discharge, Jack returned to Minnesota and furthered his education at the University of Minnesota. He then worked for RC Cola in Apple Valley, MN and Huntington Beach, CA. In 1982, Jack began working for Lanners Construction in Minneota. Two years later he and his brother, Bob Lanners, purchased the business and continued on as Lanner’s Brother’s Construction in Marshall. On June 26, 1993, Jack was united in marriage to Wilma Bos in the backyard of their home in Marshall, MN. The couple shared over 24 years of marriage together all the while working diligently daily side by side in the family construction business. They enjoyed serving farmers and area grain companies which often meant eating dinner together in the late of a day during the hustle and bustle through many fall seasons. At the heart of their lives was their service at Cornerstone Methodist Church which they joined in 1992. Jack served as Church Trustee for several years, assisting with maintenance of the building and repair anything that he got called upon to fix! The congregation will long remember his presence as an usher at nearly every Sunday and special holiday service as his welcoming smile and laugh drew them into the sanctuary. Jack was married to Rachal Mueller in December 1967. The couple shared 24 years of marriage and had 4 children: Amy, Brenda,Christa, and Richard. The family lived in Apple Valley, MN, and then moved to Huntington Beach, California in 1975. They returned to Minnesota in 1979. Jack was a man of strong character, who lived out what he learned. He treated everyone with respect and dignity. If you stopped into his office wearing the smell of farm work clothes or in your suit and tie, Jack would interact with you professionally and fairly, and most certainly entertain you with his wit! His business practices were fair, consistent and quality driven. Together committed in Lanners Brother’s Construction with his brother, Bob Lanners, and mostly recently mentoring his nephew, Galen Lanners, they grew the business to service farms spanning over 5 counties. Along with the daily work that was his passion, Jack enjoyed playing cards at family gatherings, golfing, woodworking, cheering on his grandchildren at games and school functions, worked out at the YMCA, and went fishing with friends and family! Jack will be greatly missed especially by his wife, children and grandchildren. But Jack touched so many lives in moving memorable ways with the light he carried deep within. May that light continue on for generations to come! John “Jack” Lanners passed away on Friday, September 15, 2017, in Sioux Falls, South Dakota, at the age of 73 years, 7 months, and 9 days. He passed from this earth into heaven after an unexpected challenge with cancer. Blessed be his memory. Jack is survived by his wife, Wilma Lanners of Marshall; 6 children, Amy Lanners of San Diego, CA, Brenda (and Marty) Lanners of San Diego, CA, Christa (and Matt) Hopkins of Bailey, CO, Richard (and Angela) Lanners of Underwood, MN, Stacey Ross of Marshall, Renee (and Patrick) Kinney of Miami, FL; 14 grandchildren, McKensi (and Craig) Long of St. Paul, Elijah (and Via) Reed of San Diego, CA, Max and Remy Lanners Furcolo of San Diego, CA, Ella and Lily Hopkins of Bailey, CO, Benjamin, Samantha and Evelyn Lanners of Underwood, Jasmine Kinney of Miami, FL, Darian, Natasha, Gabriella, and Kameron Ross of Marshall; 4 brothers, James (and Joan) Lanners of Brookings, SD, Rodney (and Betty) Lanners of Kandiyohi, Robert Lanners of Minneota, Joseph (and Penny) Lanners of Madison, SD; nephews, nieces, other relatives and many friends. He was preceded in death by his parents, Norbert and Elizabeth (DeSmet) Lanners; brother, Richard Lanners; sister, Judy Arzdorf; and sister-in-law, Judy Lanners.

The family of John "Jack" Edward Lanners created this Life Tributes page to make it easy to share your memories.

Send flowers to the Lanners family.