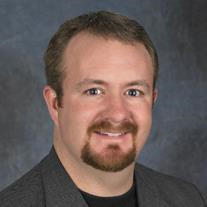 John Daniel Schuh, age 45, of rural Tracy, Minnesota, passed away on Tuesday, March 15, 2016. Mass of Christian Burial is 11:00 a.m. Tuesday, March 22, 2016, at the Church of St. Michael in Milroy, Minnesota. Private interment will be held later in the day in the St. Michael Catholic Cemetery. Visitation will be held from 4:00 – 8:00 PM Monday, March 21, 2016, at the Church of St. Michael in Milroy, Minnesota. The Knights of Columbus Rosary is at 4:00 PM on Monday and a prayer service is set for 7:00 PM, at the church. Visitation will continue one hour prior to the service, from 10:00 – 11:00 AM, on Tuesday again at the church. John Daniel Schuh was born on January 31, 1971, in Fairmont, Minnesota. He was the son of Daniel and Mona (Brenner) Schuh. John was baptized, received First Communion, and was confirmed at St. John Vianney in Fairmont. He attended elementary school at St. John Vianney and graduated from Fairmont High School with the class of 1989. John furthered his education, earning a bachelor’s degree at Mankato State University in 1994. He then earned his master’s degree in Wellness Management from Ball State University in Muncie, Indiana in 1997. While in graduate school, John was united in marriage to Stacy Lanoue on July 29, 1995. The couple then moved from Indiana to Marshall, Minnesota for a couple years before settling outside Tracy. They shared 20 years of marriage and raised two boys, Alex and David. John served as the director of public health for Lincoln/Lyon/Murray/Pipestone Counties based in Marshall. John then worked in sales before working as a sales consultant with A & B Business Solutions, where he was currently employed. John pursued his dreams, and was especially proud of progress on his soon-to-open Personal Best Sports and Fitness Gym in Tracy, which was his lifelong dream. John loved baseball. He shared his love of the sport with family and countless friends and teammates throughout his life. John enjoyed attending Minnesota Twins baseball games with his brother and dad, as well as spring training games in Arizona. Growing up, he would play wiffleball with his brother in front of their childhood home in Fairmont as much as traffic would allow. He was a dedicated athlete, playing baseball at Fairmont, at Mankato State, and then with the Milroy Yankees. John was a longtime player on the Milroy Baseball Team, a member of the Milroy Baseball Board, and an honored inductee into the Milroy Baseball of Hall of Fame. He thoroughly enjoyed his involvement in the development of the Tracy youth baseball program and his role as coach. John’s other enjoyments included hunting, heavy metal music, playing guitar, and the friendships he forged with local bands, musicians, and fellow fans. He loved attending concerts with his friends and brother. John was also a member of the Knights of Columbus and a member of St. Michael Catholic Church. John was known for his passion, sense of humor, wit, kindness, and gratitude. He deeply loved his family and friends. He will be dearly missed. Blessed be his memory. John is survived by his wife, Stacy Schuh of Tracy; children, Alex and David Schuh; parents, Dan and Mona Schuh of Mankato; parents-in-law, George and Mary Lanoue; siblings, Ryan (and Wendy) Schuh of Mankato, Mari (and Joe) Quam of Racine, WI; brothers- and sisters-in-law, Jolene (and Daryl) Tople of Underwood, Steve (and Dawn) Lanoue of St. James, Joe (and Becky) Lanoue of Tracy, Larry (and Phyllis) Lanoue of Tracy, Mary (and Dick) Schlemmer of Milroy, Rose (and Chris) Kramer of Lucan, Linda (and Neil) Dolan of Lucan, George (and Peggy) Lanoue of Clara City, Christine (and Jeff) Landherr of Cambridge, Angie (and Jeff) Orren of Milroy, Pat (and Christy) Lanoue of Morris; nephews, nieces, other relatives and many lucky friends. John is preceded in death by his grandparents, Linus and Colette Brenner and Frank and Frances Schuh; brother-in-law, Michael Lanoue; cousin, Kristy Jones; uncle, Jim Gaul; uncle, Herman Koithan; and aunt, Mary Koithan. Arrangements are with the Hamilton Funeral Home in Marshall, Minnesota. Guestbook and tribute wall available online at www.hamiltonfh.com.

The family of John Daniel Schuh created this Life Tributes page to make it easy to share your memories.

Send flowers to the Schuh family.