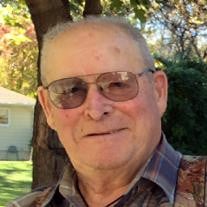 John Steinle, age 79, of Balaton, Minnesota, passed away on Tuesday, May 3, 2016, at the Avera Marshal Regional Medical Center in Marshall, Minnesota. Funeral Services are 10:30 AM Friday, May 6, 2016, at Trinity Lutheran Church in Balaton. Interment will be in Lakeside Cemetery, Balaton, at a later date. Visitation will be from 3:00 – 7:00 PM Thursday, May 5, 2016, at Trinity Lutheran Church in Balaton. A prayer service is scheduled for 7:00 PM. Visitation will continue one hour prior to the service, from 9:30 – 10:30 AM, on Friday, again at the church. John George Steinle was born on August 3, 1936 in Lamberton, Minnesota. He was the son of George and Verna (Carlson) Steinle. John was baptized as an infant, received first communion, and was confirmed in his youth at St. Joseph Catholic Church in Lamberton, Minnesota. He attended Lamberton schools before starting his career in various heavy construction jobs, worked as a part-time police officer, and owned Steinle’s Locker in Lamberton from 1968 to 1970, before working in wholesale sales. John was united in marriage to Darlene Halvorson. The couple spent 17 years together and raised 5 children before they separated in 1971. On June 21, 1974, John was married to Janice (Pearcy) Mathews in Sioux Falls, South Dakota. Their blended family added 5 step-children to John’s life. The couple lived in Marshall for 30 years where John continued in construction, and also worked for the Lyon County Highway Dept. for 15 years. He retired in February of 2000. John and Jan moved to Balaton about 10 years ago. The couple spent over 41 years together. John was a member of Trinity Lutheran Church in Balaton. His enjoyments in life included hunting, fishing, and anything related to those two past-times. He was clever and creative, always looking for a way to modify, improve, or better something. He enjoyed joy-riding in his golf cart and loved to be with his family, especially the grandchildren. John passed away on Tuesday, May 3, 2016, in Marshall, Minnesota at the age of 79 years and 9 months. Blessed be his memory. John is survived by his wife, Janice “Janie” Steinle of Balaton, children, John, (and Deb) Steinle of Brewster, Tom (and Mary) Steinle of Rosemount, Mark (and Julie) Steinle of Spirit Lake, IA; son-in-law, Dale Petersen of Lamberton; step-children, Dale (and Jennifer) Mathews of Pipestone, Nancy (and Steve) Holm of Marshall, Darleen Sherman of Balaton, Tamela (and Kevin) Moran of Marshall, Robert Mathews of Walnut Grove; 13 grandchildren; 11 step-grandchildren; 13 great-grandchildren; 14 step-great-grandchildren; brother, Jim (and Pat) Steinle of Swanville; brother-in-law, Donald Scovill of Rochester; first wife, Darlene Kling of Lamberton; nephews, nieces, other relatives and many friends. He was preceded in death by his parents, George and Verna Steinle; son, Joseph Steinle; daughter, Vicki Petersen; granddaughter, Kathy Petersen; son-in-law, Dale Sherman; and sister, Beverly Scovill. The family invites everyone to a luncheon at church immediately following the service.

John Steinle, age 79, of Balaton, Minnesota, passed away on Tuesday, May 3, 2016, at the Avera Marshal Regional Medical Center in Marshall, Minnesota. Funeral Services are 10:30 AM Friday, May 6, 2016, at Trinity Lutheran Church in Balaton.... View Obituary & Service Information

The family of John George Steinle created this Life Tributes page to make it easy to share your memories.

John Steinle, age 79, of Balaton, Minnesota, passed away on Tuesday,...

Send flowers to the Steinle family.