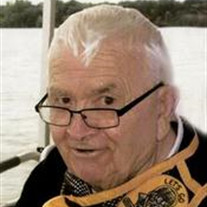 Balaton: John R. Wreath, age 85, of rural Balaton, passed away at the Prairie View Health Care Center in Tracy on Monday, July 9, 2012. Funeral services will be 10:30 A.M. Thursday, July 12th at the Balaton United Methodist Church. Visitation will be one hour prior to the service at the church. Burial will be in the Trinity Lutheran Cemetery. The Hamilton Funeral Home in charge of the arrangements. John Robert was born on June 1, 1927 in Tracy to John Logan and Lena (Pryor) Wreath. He attended school at Amiret and was baptized and confirmed in the Methodist faith. On February 17, 1950, John was united to marriage to Marilyn “Rusty” Meyer in Marshall. They farmed near Amiret for a number of years and then moved and continued farming in Custer Township. John was active member of community serving as a board member of the Balaton-Ruthton-Arco Farmers Co-op; Custer Township Board and was a Lyon County Commissioner for six years. John’s love of his life was his family. His other enjoyments were farming, hunting, fishing, dancing, and playing cards. John passed away at the Prairie View Health Care Center in Tracy on Monday, July 9, 2012. He had reached the age of 85 years, 1 month and 8 days. John is survived by four children, Katherine Ruud and Sue Olson both of Marshall, Mike (Colleen) Wreath of Balaton, and Julie (Roy) Revel of Lynd; nine grandchildren, Krista (Nate) VanNote, Mark (Heidi) Ruud, Eric (Emi) Olson, Tom (Nicole) Ruud, Jill Wreath, Nate Olson, Hilary (Terry) Kesteloot, Kayla Revel and Michael Revel; five great grandsons, Austin, Terry, Gunnar, Riley and Finn. John was preceded in death by his parents; wife, Marilyn on August 5, 2001; son, Douglas Robert; nine siblings; and son-in-law, Terry Olson. Blessed Be The Memory Of John Wreath.

The family of John Robert Wreath created this Life Tributes page to make it easy to share your memories.

Send flowers to the Wreath family.