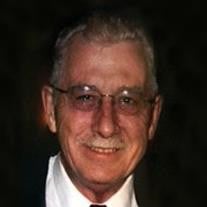 Johnnie “Vic” Mears, age 73, of Marshall, Minnesota, passed away on Tuesday, September 12, 2017, at Morningside Heights Care Center in Marshall, Minnesota. Memorial Services are 10:00 a.m. Monday, September 18, 2017, at First Lutheran Church in Marshall, Minnesota. Interment will follow in the Marshall Cemetery. Visitation will be held from 5:00 – 8:00 p.m. Sunday, September 17, 2017, at the Hamilton Funeral Home in Marshall. A prayer service is scheduled for 7:00 p.m. Visitation will continue one hour prior to the service, from 9:00 – 10:00 a.m., Monday at the church. Clergy Officiating: Rev. Scott Fuller Congregational Hymns: Amazing Grace / On Eagle’s Wings Special Music: My Way / How Great Thou Art ~ by Elvis Honorary Urn Bearers: Shawn Mears, Chase Mears, Drew Mears, Hunter Mears, Kole Mears, Hunter Smidt, Caiden Smidt, Andrew Woessner, Jacob Woessner Military Honors: Marshall American Legion, Post #113 Johnnie Victor Mears was born on September 2, 1944, in Rugby, North Dakota. He was the son of Thomas and Marion (Wolf) Mears. Vic was baptized as an infant, received first communion, and confirmed in his youth in the Catholic Church. Marion passed away when Vic was very young and he was raised by his uncle, growing up and attending school in Rugby. He graduated from the Rugby High School with the class of 1962. Vic then went on to serve his country in the United States Army during Vietnam. After his honorable discharge, he returned to North Dakota to work with Ottertail in Langdon, North Dakota. Vic and his brother, Simon, began Grafton Electric in 1975. Years later, Vic bought out his brother in 1984 and ran the business until 1993. Vic moved to Marshall, Minnesota, where he worked for Obe’s Electric and he met his soon-to-be wife, Judy (Burt) Larson. Vic started his own company, Mears Electric, in 1994. Then, Vic and Judy were married on June 24, 1995, at First Lutheran Church in Marshall. The couple blended their families while Vic and Judy shared over 22 years together. Vic retired July 1, 2015. He was a member of First Lutheran Church and the American Legion Bar Board. Vic spent countless hours in developing the hockey program in Grafton, North Dakota, and watching all 5 boys play hockey throughout their childhood and high school careers. He also watched is daughter dance in ballet. Vic enjoyed fishing trips with his boys and more recently, time spent fishing with his little buddies, Caiden and Hunter. His other enjoyments in life included camping, golfing, playing bean bags, billiards, the Viking and Twins, and watching his grandchildren in hockey, football, baseball, and basketball. Vic was a friend to all, always making a point to stop and talk and sought to help in his community. He will be greatly missed. Johnnie “Vic” Mears passed away on Monday, September 12, 2017, in Marshall, Minnesota, 10 days after his 73th birthday. Blessed be his memory. Vic is survived by his wife, Judy Mears of Marshall; 6 children, Jerry (and Derene) Mears of Andover, MN, Scott Mears of Portland, OR, Troy Mears of Lake Oswego, OR, Chad (and Julie) Mears of West Fargo, ND, Kurt (and Laurie) Mears of Oak Grove, MN, Correen (and Kirk) Lancaster of Manhattan, KS; 3 step-children, Malissa (and Jeff) Smidt of Marshall, Wendy (and Tony) Mork of Tea, SD, Dannie Burt of Humboldt, SD; 21 grandchildren; 1 great-grandchild; brothers, Emery (and Annette) Mears of Rolla, ND, Simon (and Pauline) Mears of Mesa, AZ; sisters-in-law, Joyce Thompson of Grand Forks, MN, Jeanie Haas of Marshall; nephews, nieces, other relatives and many friends. He was preceded in death by his parents, Thomas and Marion Mears, and 4 sisters, Joyce Hunt, Jane Baraaten, Leatha Marley, and Juliann Draper.

The family of Johnnie "Vic" Mears created this Life Tributes page to make it easy to share your memories.

Send flowers to the Mears family.