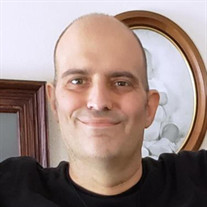 Jon Koel, age 42, of Marshall, Minnesota, died peacefully on Monday, September 13, 2021, at his home with family at his side. Funeral Services are 1:00 p.m. Saturday, September 18, 2021, at Cornerstone United Methodist Church in Marshall, Minnesota. Interment will follow in the Marshall Cemetery. Refreshments will be held in the church basement following the interment. Visitation will be held from 5:00 – 7:00 p.m. Friday, September 17, 2021, at the Hamilton Funeral Home in Marshall. The evening will conclude with a Prayer Service at 7:00 p.m. Visitation will then continue one hour prior to the service on Saturday, from 12:00 p.m. until the time of services at 1:00 p.m., at the church. In lieu of flowers, memorials are preferred to the family, and they will direct to designated charities. Jon Charles Koel was born October 19, 1978, in Sioux Falls, South Dakota. He was the son of Delmar and Deede Koel. Jon grew up in Rock Rapids, Iowa, and at age 10 the family moved to Marshall, Minnesota. After graduating from Marshall Area Christian High School, he attended Southwest Minnesota State University for one year. Jon then began working with Reinhart Foodservice in Marshall. Several years later he decided to further his education at Minnesota West Technical College in Granite Falls where he earned a degree in Internet Technology. Jon began working for Schwan's in Marshall before moving to Mankato for a couple of years to continue in his IT career. Most recently Jon was living in Chaska, working for Flexential where he began in 2015. When health challenges arose, Jon returned home to Marshall last year to be with family. Every second of time caring for Jon turned into an incredible blessing to his parents and family. Jon was an avid gamer and enjoyed time spent both virtually and in person with friends. He was known for having a great, albeit dry, sense of humor. Jon also cherished his two cats, Morgan (also known as “My Beautiful Grey”) and Rusty. Jon returned to his faith in September of 2020, and just this year, on August 11, Jon was baptized at Cornerstone United Methodist Church. On Monday, September 13, 2021, Jon died peacefully surrounded by his family at home in Marshall. Jon’s Lord Jesus Christ was present when he moved into Heaven. He reached the age of 42 years 10 months and 25 days. Blessed be his memory. Jon is survived by his parents, Delmar and Deede Koel of Marshall; three siblings, Peter (and Kim) Koel of Osakis, Elizabeth (and Tim) Gunderson of Marshall, Jennifer (and Cade) Bodley of Seattle WA; six nieces and nephews, Michael Koel of the Twin Cities, Gabrielle (and Graham) Swenson of Ankeny, IA, Zoё Gunderson of Marshall, Liesel Gunderson of Marshall, Meredith “Belle” Bodley of Seattle, WA, Jillian “Mae” Bodley of Seattle, WA; a soon expected great-niece, Irene Swenson; special friend, Kristina "Krissy" Fick of Cherokee, IA; other relatives and many friends.

The family of Jon Charles Koel created this Life Tributes page to make it easy to share your memories.

Send flowers to the Koel family.