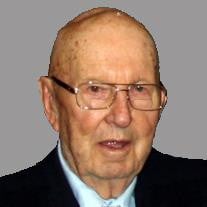 Joseph Brown, age 91, of Marshall, Minnesota, formerly of Groton, Connecticut, died on Saturday, October 21, 2017, at the Hospice house of Murray County in Slayton. Private Family Memorial Services will be held at a later date. Joseph (Joe) Franklin Brown, child of God, was born on July 2, 1926, in Jerome, Arizona. He was the son of Frank Carson Brown and Calla Jo (Wright) Brown. In 1943, Joe enlisted in the United States Navy and served in the U.S. Naval Submarine Service throughout his career. He served in both the Atlantic and Pacific theaters in WWII. On February 26, 1944, Joe was united in marriage to Charlotte Steinbough, whom he referred to as “the love of his life” at the Greenville Congregational Church in Norwich, Connecticut. The couple was blessed with two daughters. The family lived many places and upon completion of his time in the Military, they eventually settled in Groton, Connecticut, where Joe was employed as a Test Superintendent at the Electric Boat Division of General Dynamics until retirement. The couple then moved to Marshall, Minnesota to be close to family. Joe and Charlotte were blessed to have had over 73 years of marriage. Joe was a very caring husband, father and grandfather. He was an avid reader and enjoyed people. He especially enjoyed sharing stories about his Submarine Service. Joe was a member of Delta 119 Masonic Lodge, Marshall Area Shrine Club, Zuhrah Shrine Temple. He was a charter member of the Submarine Veterans of WWII, the United States Submarine Veterans, Inc. and the American Legion Post #113 in Marshall. Joe is survived by two daughters, Rev. Fran (Tom) Hill of Starbuck, MN, JoAnn (Michael) McDaniel of Fruitland Park, FL; five grandchildren, Winona Barber (fiancé Bill Bornitz) of Marshall, Tom (Susan) Geske of Marshall, Tammy (George) Passwater of Florida, Martha (Tracy) Milner of Florida, Heidi McDaniel of Florida; sixteen great-grandchildren; and 6 great-great-grandchildren. Joe was preceded in death by his wife, Charlotte, and his parents. Blessed be his memory.

The family of Joseph Franklin Brown created this Life Tributes page to make it easy to share your memories.

Send flowers to the Brown family.