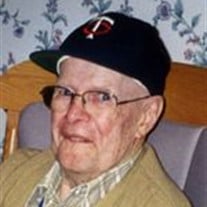 Joseph Haney, age 96, of Marshall passed away on Monday, March 17, 2008 at the Morningside Heights Care Center in Marshall. Funeral services are planned for 10:30 AM on Thursday, March 20, 2008 at the Hamilton Funeral Home in Marshall. Burial will be in the Custer Cemetery in Garvin. Visitation will be held from 5 to 7 PM on Wednesday, March 19, with a prayer service at 6:30 PM, at the Hamilton Funeral Home. Joseph Albert Haney was born on April 7, 1911 to Daniel and Ella (Helms) Haney in Kossuth County, Iowa. He attended country schools in the Worthington and Marshall areas before beginning work as a hired hand on farms near Fulda and Worthington. On February 4, 1940, Joe was united in marriage to Evelyn Harris in Worthington. Joe and Evelyn farmed in the Balaton and Tracy areas until 1960. They then moved to Marshall where Joe worked as a foreman for Appleton Silo until 1980, followed by several years as a janitor for Olson and Johnson. He lovingly cared for Evelyn during her extended illness until she passed away in September 2001. He was a member of Eagles Aerie #3405 for many years and was named Eagle of the Year in 1984-85. His enjoyments included dancing, playing bingo and cards, attending softball games, watching David bowl, spending time at the lake with Darlys’ family and friends, and watching the Minnesota Twins. Joe is survived by his children, Darlys (and Don) Brewers and David (and Lisa) Haney of Marshall; 6 grandchildren, Debbie (and DeWayne) Schaffran of Wood Lake, Stacy Brewers of Andover, Denise (and Joe) Birman of Tracy, Angela (and Courtney) Hughes of Marshall, Joe (and Sara) Haney of Marshall, and Ed Haney of Marshall; 10 great-grandchildren; and many other relatives and friends. He was preceded in death by his wife, Evelyn; son, Richard; sisters, Edith Kruse and Ada Kruse; brothers, William, John, and Harry Haney. Memorials preferred to Prairie Home Hospice. Blessed be the memory of Joe Haney

Joseph Haney, age 96, of Marshall passed away on Monday, March 17, 2008 at the Morningside Heights Care Center in Marshall. Funeral services are planned for 10:30 AM on Thursday, March 20, 2008 at the Hamilton Funeral Home in Marshall. Burial... View Obituary & Service Information

The family of Joseph Albert Haney created this Life Tributes page to make it easy to share your memories.

Joseph Haney, age 96, of Marshall passed away on Monday, March...

Send flowers to the Haney family.