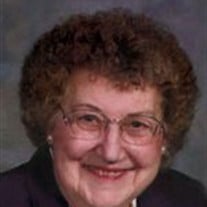 Joy Farr, age 89, of Marshall, passed away at the Avera Marshall Regional Medical Center on Sunday, September 13, 2009. Funeral services will be 1:30 P.M. Wednesday, September 16, 2009 at Wesley United Methodist Church. Burial will be in the Tracy City Cemetery. Visitation will be at the church on Wednesday, one hour prior to the service. Joy M. Ingham was born on September 21, 1919 in Turtle Lake, Wisconsin to Walter and Mary (Gustafson) Ingham. She was baptized and confirmed at the Tracy United Methodist Church and was in the graduating class of 1937 at the Tracy High School. On May 31, 1942, Joy was united in marriage to Kenneth F. Farr in Lamberton. They lived with Kenneth’s parents and farmed the homestead with them for the first two years of their marriage. Kenneth and Joy then rented a farm near Tracy and farmed that for 6 years. IN 1952, they purchased their own farm west of Balaton where they worked until retiring and moving to Marshall in 1982. Throughout the years Joy was a member of the Tracy United Methodist Church, Balaton United Methodist and Wesley United Methodist. During those years, she sang in the choir, taught Sunday school, volunteered for the Red Cross, and embroidered towels for the Christmas Bazaar. Other enjoyments in her life were Bingo, playing cards, dancing, and reading. Joy passed away at the Avera Marshall Regional Medical Center on Sunday, September 13, 2009. She had reached the age of 89 years, 11 months and 22 days. She is survived by three daughters, Betty (Ned) Overcash of Sioux Falls, Kathy (Robert) Schrupp of Plymouth and Karen Sands of Cresco, IA; nine grandchildren, Janet (Mike) Hromatko, Michael (Amy) Dahlhoff, Roger (Kris) Dahlhoff, Wayne (Lisa) Erbes, Gary (Mary) Erbes, Melanie (David) Lee, Jason (Julie) Phillippe, Christine (Scott) Elzenga and Matthew (Melanie) Weeks; fifteen great grandchildren; also many nieces and nephews. She was preceded in death by her parents; husband, Kenneth; two sisters, Ethel Ingham and Edith Taarud; and a brother, Harold Ingham. Joy loved her Lord and her family. Blessed Be The Memory Of Joy Farr

Joy Farr, age 89, of Marshall, passed away at the Avera Marshall Regional Medical Center on Sunday, September 13, 2009. Funeral services will be 1:30 P.M. Wednesday, September 16, 2009 at Wesley United Methodist Church. Burial will be in the... View Obituary & Service Information

The family of Joy Marian Farr created this Life Tributes page to make it easy to share your memories.

Joy Farr, age 89, of Marshall, passed away at the Avera Marshall...

Send flowers to the Farr family.