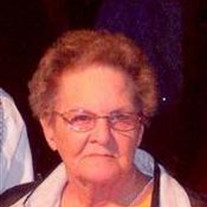 Russell: Joyce O. Newton, age 79, of Marshall, formerly of Russell, Howard Lake and Florence, passed away at the McKennen Hospital in Sioux Falls on Monday, November 28, 2011. Funeral services will be 10:30 A.M. Saturday, December 3rd at the Grace First Parish in Russell. Burial will be at a later date in the Opdal Cemetery. Visitation will be 4:00 P.M. to 8:00 P.M. with a 7:00 P.M. prayer service Friday at the Hamilton Funeral Home in Marshall. Visitation will continue at the church on Saturday, one hour prior to the service. Condolences may be sent to www.hamiltonfh.com. Joyce Olivia was born to Palmer and Myrtle (Miller) Johnson on May 25, 1932 in Tracy. She was baptized into the Lutheran faith. She was confirmed at English Lutheran Church in Cottonwood. On March 5, 1951, Joyce was united in marriage to Jacob Charles Newton at Immanuel Lutheran Church. After the couple’s marriage, they farmed outside of Florence until November of 1963 when they moved to Russell. In 1979, they moved to Howard Lake until returning to Russell in 1995. Jake passed away on February 8, 2010 and shortly after his death, Joyce moved to Hill Street Place in Marshall. Joyce worked at the Russell School and did daycare. Joyce passed away at the McKennen Hospital in Sioux Falls and joined her loving husband on Monday, November 28, 2011. She had reached the age of 79 years, 6 months and 3 days. Joyce is survived by six children, Kathryn (and Tom) Staniszewski, of Aurora, SD, Julie Roby of Marshall, Criss (and Rhonda) Newton of Tyler, Dana (and Becky) Newton of Newton, KS, Eric (and Vicki) Newton of Chanhassen and Jill (and Lane) Petersen, of Tyler; grandchildren, Melanie, Rhea (and Brent Schumacher), Neil and Scott Staniszewski, Emily, Elliot, Ava, Brooks, Brett and Taylor Newton, Kaitlin, McKensie and Rhaegyn Petersen two great grandchildren, Jacob McGlachlin and Kai Schumacher; and brother, Marvin Johnson, of Kirkwood, MO. Joyce was preceded in death by her parents; husband; daughter, Barbara Newton; two infant daughters, one named Peggy Sue; two grandsons, Jeremy Thovson and Matthew Roby; three sisters, Donna Johnson, Shirley Dardis and Betty Campion; and brother, Wallace Johnson. Joyce’s enjoyments in life include crocheting and embroidery, reading, playing cards and doing puzzles, puzzle books, watching sports on TV, cooking and food, fishing, going to the casino and spending time with her children and grandchildren. Joyce was a faithful member of Grace First Parish in Russell at the time of her death. Blessed be the memory of Joyce Olivia Newton.

Russell: Joyce O. Newton, age 79, of Marshall, formerly of Russell, Howard Lake and Florence, passed away at the McKennen Hospital in Sioux Falls on Monday, November 28, 2011. Funeral services will be 10:30 A.M. Saturday, December 3rd at the... View Obituary & Service Information

The family of Joyce Olivia Newton created this Life Tributes page to make it easy to share your memories.

Send flowers to the Newton family.