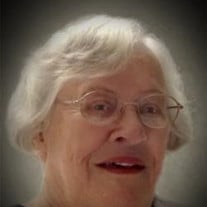 Cottonwood: Joyce E. Peltzer, age 82, of Cottonwood, after a short illness, passed away at the Hospice House in Marshall on Monday, May 12, 2014. Celebration of Joyce’s life will be Monday, May 19 at 7:00 p.m. at the Hamilton Funeral Home in Marshall. Visitation will be one hour prior to the service. A second service will be will be Friday, June 20th at 7:00 P.M. with visitation one hour prior to the service at Lutheran Church of Christ the Redeemer at 55th and Penn. Joyce Elaine was born July 21, 1931 to Fred and Lucille (Olson) Peltzer in St. Paul, Minnesota. She was baptized and confirmed at the Reformation Lutheran Church. She graduated from Central High School and went on to graduate from Macalister College and the University of Minnesota with a Master’s Degree in Social Work. She was a social worker for the Jewish Family Service, the American Lutheran Church and Lutheran Social Services. In response to her work as a social worker, in 1973 Governor Wendell Anderson proclaimed November 2, 1973 as a day dedicated to the MN Council on Unmarried Parents by saluting Joyce Peltzer and “urged her friends and co-workers to honor her on that day.” In October 1973, The University of Minnesota recognized Joyce as “Social Work Alumni of the Year,” and in June 1993 Joyce received an Alumni Citation from Macalester College for her “unselfish and effective service to humanity.” In 1990 Joyce and Sandra Aronen began their life together in Minneapolis. In 2000 they moved to Cottonwood to live near the lake. On December 7, 2011, Joyce and Sandy were united in marriage in Okoboji, IA. Joyce was involved in many peace and justice issues and organizations. She will be remembered for her ability to accept everyone as they were – at any age. She is survived by her wife Sandra of Cottonwood; two sons, David (Theresa) Choe Peltzer Johnson of Minneapolis and Steve (Donna) Stewart of Apple Valley; nephew/son-in-law, Jason (Teresa Aronen) Schorn of Tonopah, NV, four grandchildren, Larissa, Savoy, Maxwell and Phoenix; nephew Adam (Barbara) Schorn of Boston, MA and son-in-law Jason (Jana Sackmeister) Aronen of Minneapolis; and many other relatives and friends. She was preceded in death by her parents, a sister Nancy Schorn, and an infant granddaughter Elise. In lieu of flowers, memorials may be given to Southern Poverty Law Center, St. Jude’s Children Research Hospital, PFLAG Buffalo Ridge Chapter, or Prairie Home Hospice. Blessed be the memory of Joyce E. Peltzer.

Cottonwood: Joyce E. Peltzer, age 82, of Cottonwood, after a short illness, passed away at the Hospice House in Marshall on Monday, May 12, 2014. Celebration of Joyce&#8217;s life will be Monday, May 19 at 7:00 p.m. at the Hamilton Funeral Home... View Obituary & Service Information

The family of Joyce Elaine Peltzer created this Life Tributes page to make it easy to share your memories.

Send flowers to the Peltzer family.