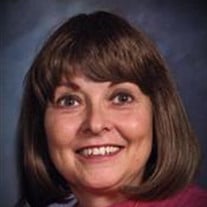 Marshall: Judy A. Girard, age 63, of Marshall, passed away on Tuesday, August 27, 2013. Funeral services will be 11:00 A.M. Friday, August 30th at Wesley United Methodist Church. Visitation will be 4:00 P.M. to 8:00 P.M. with a 7:30 P.M. Prayer Service Thursday at the church and will continue at the church on Friday one hour prior to the service. Judy was born on May 9, 1950 in Marshall to Kenneth and Louise (Sillars) Marks. She was baptized and confirmed at Wesley United Methodist Church. She graduated from Marshall High School in 1968. Judy was united in marriage to Donald Girard on January 22, 1983 at Wesley United Methodist Church. Judy worked at Southwest State University in ECSU. While her children were growing up, she was active in 4H. She was a member of the Westside Club, bowled for many years, an avid softball player and had received a black belt in Taekwondo. Judy loved being with and doing things for her family and friends. Her enjoyments included woodworking, crocheting, knitting, cross stitch and collecting angels. Judy passed away peacefully after a long battle with cancer at Avera Marshall Medical Center on Tuesday, August 27, 2013. She had reached the age of 63 Years, 3 months and 18 days. She is survived by her husband Don of Marshall; three children, Bobbie (Darin) Holliday of Muscatine, IA, Christy (Brentt) Hoover of San Diego, CA and John Girard of Detroit Lakes; six grandchildren, Nicholas and Joseph Jensen, Nathan Holliday, and Madeleine, Samuel, and Maxwell Hoover; two sisters, Nancy Meyer of Marshall and Marie Freeman of Grove, OK; also many other relatives and friends. She was preceded in death by her parents and a sister, Mae Marks. Blessed be the memory of Judy Ann Girard.

The family of Judy Ann Girard created this Life Tributes page to make it easy to share your memories.

Send flowers to the Girard family.