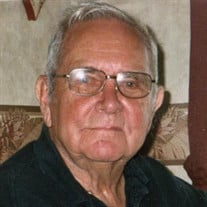 Jullo Kor, age 93, of Marshall, Minnesota, died on Friday, March 5, 2021, at the Avera Morningside Heights Care Center in Marshall. Graveside Service will be held at 10:00 a.m. Tuesday, March 9, 2021, at the Lynd City Cemetery. A walk-through visitation will be held from 5:00 – 7:00 p.m. Monday, March 8, 2021, at the Hamilton Funeral Home in Marshall. Occupancy limits and social distancing must be observed throughout all services. Masks are required at all public indoor gatherings. Jullo Kor was born the youngest of 11 children to Aiko and Geziena (Visker) in White, South Dakota, on September 3, 1927. He grew up in Tracy, Minnesota, and after the 8th grade moved to Little Rock, Iowa, briefly before returning to Marshall and finally Lynd, where he worked for his brother, Eltjo. He then worked for Heine Miller Construction in Marshall until 1950. Jullo entered the United States Army on October 23, 1950, and served 9 months in Korea defusing land mines. He later served in the tank-led infantry and was a combat engineer. Jullo earned 5 battle stars and 2 bronze stars while serving his country prior to his return home on July 22, 1952. He was proud to stay in the Army Reserves for another 5 years. Jullo was united marriage to Irene Eda Serreyn on August 30, 1952, and the couple started farming outside Marshall. Three years later, they moved to Arco and farmed another 12 years prior to selling the farm and moving back to Marshall. Jullo worked for Coast to Coast and ultimately for the City of Marshall with the street department. He retired in 1989 after 21 years with the city. Jullo was a long-time member of Christ United Presbyterian Church in Marshall. He was also active in the Marshall Eagle’s Club, American Legion, VFW, and DAV. His enjoyments in life included traveling, camping, fishing, and gardening but his passion was his family. Jullo Kor died peacefully on Friday, March 5, 2021, in Marshall, Minnesota. He reached the age of 93 years, 6 months, and 2 days. Blessed be his memory. Jullo is survived by his wife, Irene Kor of Marshall; daughter, Roberta (Pete) Kaiser of Red Lodge, MT; daughter-in-law, Cathy Kor of Lake Wilson; grandchildren, Robin (Brian) Gilbertson of Lake Wilson, Krista (Aimee Dunavant) Kaiser of Albuquerque, NM, Kayde (Jeff) Whiteside of Fairbanks, AK; great-grandchildren, Dylan & Reese Gilbertson of Lake Wilson; nieces, nephews, other relatives, and friends. He was preceded in death by his parents; daughter, Tammy Kor in 1960; son, Robert Kor in 1991; sister, Sadie Kor; and 9 brothers, Jerry Kor, Henry Kor, Claus Kor, Aiko Kor, Jans Kor, John Kor, Eltjo Kor, Johannes Kor, and Jake Kor.

The family of Jullo Kor created this Life Tributes page to make it easy to share your memories.