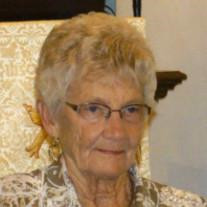 June Eloise Herbert, age 83, of Balaton, passed away peacefully while surrounded by family on Thursday, August 20, 2015, at her home in Balaton. Memorial Services are 11:00 AM Tuesday, August 25, 2015, at Christ Evangelical Lutheran Church in Marshall. Entombment will be at a later date in the Marshall Cemetery. Visitation will be from 5:00 – 8:00 PM Monday, August 24, 2015 at the Hamilton Funeral Home in Marshall. Visitation will continue one hour prior to the service, from 10:00 – 11:00 AM, on Tuesday at the church. Clergy Officiating: Rev. Keith Schreiner Organist: Teri Knutson Congregational Hymns: “On Eagle’s Wings,” “Amazing Grace,” “Be Still My Soul” Honorary Urn Bearers: Clayton Gullickson, Ray Harden, Barry Nauman, Brent Knapper, Jeremy Nauman, Jeff Knapper Ushers: Tom Clapsaddle, Lou Ballman, Brock Murphy Greeters: Trisha Nauman, Kathy Knapper June Eloise Severin was born on January 31, 1932 in Sauk Centre, Minnesota. She was the daughter of Helmer and Clara (Ecklund) Severin. June was baptized as an infant and was confirmed in her youth in the Lutheran faith. She attended country school in Sauk Centre and also attended Sauk Centre High School. June worked as a homemaker, owned her own drapery business in Balaton and also tended bar while she raised her three girls, Cheryl, Deb, and Kay. On November 23, 1973, June was united in marriage to Tom Herbert at Sillerud Lutheran Church in Balaton. The couple lived in and farmed near Amiret until 2008 when they retired and moved onto Lake Yankton in Balaton. They were married over 41 years. June was a member of the Ladies Aid at her church and also volunteered with Meals On Wheels. She loved playing cards, especially Pinochle and Bridge, cross-stitch, and she was an avid shopper – often taking family and friends for retail adventures. She looked forward to babysitting the grandkids and in her younger days, was the most popular chaperone request – she knew how to have fun! She and Tom cherished their time together on yearly trips to Hawaii. June Herbert entered her heavenly home on Thursday, August 20, 2015 at the age of 83 years, 6 months, and 20 days. Blessed be her memory. June is survived by her husband, Tom Herbert of Balaton; children, Cheryl (and Clayton) Gullickson of Garvin, Deb (and Ray) Harden of Marshall, Kay (and Barry) Nauman of Marshall; 6 grandchildren, Brent (and Kathy) Knapper of Milroy, Dawn (and Tom) Clapsaddle of Russell, Jeff Knapper of Willmar, Carly (and Lou) Ballman of St. Peter, Jeremy (and Trisha) Nauman of St. Peter, Mandy Kay (and Brock) Murphy of Aberdeen, SD; 10 great-grandchildren, Jordan, Savannah, Jonah, Leah, Raven, Bode, Jada, Laura, Brecken, Jamesen; sister-in-law, Shirley Severin of Forrest Lake; best friend, Janice Nordmeyer of Lebanon, MO; nephews, nieces, other relatives and many friends. June is preceded in death by her parents, Helmer and Clara Severin; son-in-law, Robert Knapper; and brother, Willard Severin. The family invites attendees to the church basement for a luncheon following the service. In lieu of flowers, memorials are preferred to Tyler Hospice.

June Eloise Herbert, age 83, of Balaton, passed away peacefully while surrounded by family on Thursday, August 20, 2015, at her home in Balaton. Memorial Services are 11:00 AM Tuesday, August 25, 2015, at Christ Evangelical Lutheran Church... View Obituary & Service Information

The family of June Eloise Herbert created this Life Tributes page to make it easy to share your memories.

Send flowers to the Herbert family.