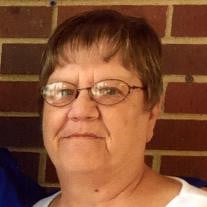 Karen Rund, age 66, of Marshall, Minnesota, passed away on Friday, March 3, 2017, at her home in Marshall. Funeral Services are 10:00 a.m. Tuesday, March 7, 2017, at St. Stephen Lutheran Church in Marshall, Minnesota. Visitation will be held from 4:00 – 7:00 p.m., Monday, March 6, 2017, at the Hamilton Funeral Home in Marshall. Monday evening will conclude with a prayer service at 7:00 p.m. Visitation will continue one hour prior to the service, from 9:00 – 10:00 a.m., on Tuesday at the church. Clergy Officiating: Rev. Lyle Snyder Organist: Mary Hauschild Congregational Hymns: How Great Thou Art / On Eagle’s Wings / Amazing Grace Active Casket Bearers: Craig Rund, Kerry Ruppert, Bob Nuy, Justin Stattelman, Troy Halter, Chad Nuy Honorary Casket Bearers: Haylee Ruppert, Zachery Ruppert, Katelyn Ruppert, Guy Esparza, Sylvia Esparza, Thalia Esparza Karen Lynn Halter was born on September 2, 1950 in St. James, Minnesota. She was the daughter of Virgil and Ardis (Malott) Halter. Karen was baptized as an infant in Butterfield, Minnesota, and after the family moved to Marshall, she was confirmed at St. Stephen Lutheran Church. Karen attended school in Marshall, graduating with the class of 1968. On May 29, 1970, Karen was united in marriage to Jerry Rund at St. Stephen Lutheran Church in Marshall. The couple made their home in Marshall and raised two children: Kimberly and Craig. They shared over 46 years of marriage together. Karen and Jerry owned and operated two businesses together. From 1980 – 1985, they owned Steve’s 1 Hour Dry Cleaning and then owned and operated Stan’s Place in Marshall, a restaurant and catering business, until 1990. Karen went on to manage the Marshall Subway for 18 years before her retirement in 2008. She was a long-time member of St. Stephen Lutheran Church and the Marshall Eagles Club. Karen was known to constantly feed those around her; from offerings to those that visited, generous Easter baskets, far too much Halloween candy, trips with the grandkids to the gas station for treats, family meals, to her career in food service. Her other enjoyments included fishing with her father, spending time with her brother, Steve, playing Bingo, and frequenting Prairie’s Edge Casino. Karen Rund died on March 3, 2017, surrounded by her family in Marshall, Minnesota at the age of 66 years, 6 months and 1 day. Blessed be her memory. Karen is survived by her husband, Jerry Rund of Marshall; children, Kimberly (and Kerry) Ruppert of Currie, Craig (and Janeth) Rund of Marshall; 3 grandchildren, Haylee, Zachery, and Katelyn Ruppert; 3 step-grandchildren, Guy, Sylvia, and Thalia Esparza; mother, Ardis Halter of Marshall; brother, Steve (and Karen) Halter of Oak Grove; sister, Judy (and Bob) Nuy of Marshall; nephews, nieces, other relatives and friends. She was preceded in death by her father, Virgil Halter. The family invites attendees to a luncheon in the church fellowship hall, immediately following the service.

The family of Karen Lynn Rund created this Life Tributes page to make it easy to share your memories.

Karen Rund, age 66, of Marshall, Minnesota, passed away on Friday,...