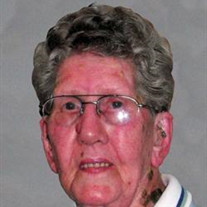 Katie B. (Bodde) Kor, age 99, of Marshall, passed away Tuesday, October 21, 2014, at Prairie Home Hospice in Marshall. Funeral services are Friday, October 24, 2014, 10:30 AM, at Christ United Presbyterian Church in Marshall, Minnesota, with interment following in the Lynd City Cemetery. Visitation will be held on Thursday, October 23, from 5:00 – 8:00 PM at the Hamilton Funeral Home in Marshall with a prayer service scheduled for 7:30 PM. Visitation will continue on Friday, one hour prior to the service, at the church. Clergy Officiating: Pastor Steven Quist Pianist: Margaret Greig Special Music: Steve Meyer, Soloist ~ “One Day At A Time” Congregational Hymns: “How Great Thou Art,” “Old Rugged Cross,” “Amazing Grace,” “Precious Lord, Take My Hand” Casket Bearers: Katie’s grandchildren ~ Daryl Gillund, Jeff Gillund, Richard Gillund, Valerie Vlaminck, Janice Vassar, Timothy Kor, Michael Kor, Deanna Mozak, & Jeremy Kor Katie Bodde was born on November 15, 1914, in Holland, Iowa. She was the daughter of Henry and Bertha (Werkman) Bodde. Katie was baptized as an infant and confirmed in her youth in the Christian faith. She attended country school in Iowa and then Ellsworth, Minnesota. She then helped her parents and other area farmers with chores and other work. She met Jans Kor while on one of her farm jobs. On September 28, 1935, Jans and Katie were united in marriage at the Presbyterian Church in Ellsworth. The couple then made their home in Sherman, SD, White, SD, Lynd, MN, and January of 1963, they moved to Marshall. The couple was blessed with four children, Frances, Wayne, Donald, and Howard. They shared 42 years of marriage before Jans passed away in 1977. In addition to being a loving homemaker and farm-wife, Katie worked as a packer at Kelco. Katie was a member of the Marshall American Legion Auxiliary and VFW Auxiliary. She was a long-time member of First Presbyterian and then Christ United Presbyterian Church in Marshall, joining on April 3, 1958. Her other enjoyments included quilting, crocheting, fishing, camping, and she was famous for her oily cakes. Katie Kor died on Tuesday, October 21, 2014, in Marshall, Minnesota at the age of 99 years, 11 months and 7 days; just 25 days shy of her 100th birthday. Blessed be her memory. Katie is survived by her 4 children, Frances (Edgar) Gillund of Marshall, Wayne Kor of Marshall, Donald (Mary Ann) Kor of Marshall, Howard (Donna) Kor of Slayton; 9 grandchildren, Daryl (Julie) Gillund of Alexandria, Jeff (Meri Jo) Gillund of Raymond, Richard Gillund of Cedar Rapids, IA, Valerie (Ronald) Vlaminck of Taunton, Janice (Greg) Vassar of Burnsville, Timothy (Beth) Kor of Apple Valley, Michael (Mary Jo) Kor of Oelwein, IA, Deanna Mozak of Phoenix, AZ, Jeremy Kor of Marshall; 17 great-grandchildren; 6 great-great-grandchildren; nieces, nephews, other relatives and many friends. Katie is preceded in death by her parents, Henry and Bertha Bodde; husband, Jans Kor; grandchildren, Melinda McDowell and Dennis Kor and all 8 of her siblings. The family invites everyone to the church basement following the services for a luncheon.

The family of Katie B. (Bodde) Kor created this Life Tributes page to make it easy to share your memories.