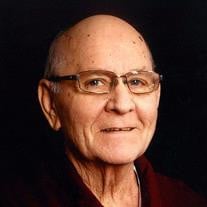 Kenny LeRoy Hansen, age 73, of Marshall and formerly of Lucan, Minnesota, passed away on Thursday, April 6, 2017, in Marshall, Minnesota. Mass of Christian Burial will be 10:30 a.m., Monday, April 10, 2017, at Our Lady of Victory Catholic Church in Lucan, Minnesota. A reception for attendees will follow in Lucan. Interment will be in the Our Lady of Victory Catholic Cemetery in Lucan. Visitation will be held from 4:00 – 7:00 p.m., Sunday, April 9, 2017, at the Hamilton Funeral Home in Marshall. A prayer service is scheduled for 6:30 p.m. Visitation will continue one hour prior to the service, from 9:30 – 10:30 AM, on Monday at the church. Kenneth LeRoy Hansen was born on May 2, 1943, in Morgan, Minnesota. He was the son of Norman and Helen (Wall) Hansen. Kenny was baptized, received First Communion, and was confirmed in the Catholic faith. He grew up in Morgan and Lucan, finishing elementary school at the Lucan public school before graduating from Milroy High School with the class of 1961. After high school, Kenny worked at the Lucan Elevator and NAPA in Watertown, South Dakota. He was blessed with 2 children, his son, Tom, in 1964 and daughter, Mary, in 1968. In 1975, Kenny began his 40-year career as a heavy equipment operator with Schmidt Construction out of Redwood Falls. He took great pride in his work and passed his knowledge onto others. After reuniting at their 35th class reunion, Kenny was united in marriage to Judy Zollner (Redding) in Redwood Falls on December 23, 1997. The couple made their home in Lucan and the farm outside Wabasso while blending their families to include 7 children. Kenny retired in 2014 to help Judy through back surgery and the couple moved into Marshall in the fall of 2016. Kenny was a dutiful member of the street-watchers club in Lucan. He was a quiet and reserved man with a twist of sarcasm and a wonderful, but dry, sense of humor. He was a member of Our Lady of Victory Catholic Church in Lucan. His other enjoyments in life included woodworking, and tinkering on projects, watching and feeding birds, brushing up on the history of Lucan, gardening with Judy, NASCAR, golf, and dabbling at the casino. He will be dearly missed. Kenny is survived by his wife, Judy Hansen of Marshall; children, Tom (Melissa) Hansen of Gulf Breeze, FL, Mary (Dan) Webb of Woodbury, Kim (Wally) Van Keulen of Marshall, Jerry Zollner of Lucan, Paula (Bob) Geistfeld of Wood Lake, Valerie Wyffels (Chad Wasilk) of Roslyn, SD, Dean (Jenny) Zollner of Wabasso; 18 grandchildren, Heather (and Chadd), Tommy Jr., Brittney, Norah, Claudia, Courtney, Colin, Brittany, Andrew, Sidney, Parker, Preston, Briar, Owen, Avery, Scott, Kaleigh, Abigail; 4 great-grandchildren, Emma, Gracie, Mayah, Blakely; siblings, Jim (Arlene) Hansen of Max, Judy Brau of Brainerd, Bunny (Bill) Schmidt of Redwood Falls, Helen (Gary) Zubel of St. Charles, IL, Donna Hansen of Wabasso; nephews, nieces, other relatives and friends. Kenny is preceded in death by his parents, Norman and Helen (Wall) Hansen; sister, Shirley Miller; brothers-in-law, Larry Brau, Jerry Miller; and niece, Sherry Potter. Blessed and eternal be his memory.

Kenny LeRoy Hansen, age 73, of Marshall and formerly of Lucan, Minnesota, passed away on Thursday, April 6, 2017, in Marshall, Minnesota. Mass of Christian Burial will be 10:30 a.m., Monday, April 10, 2017, at Our Lady of Victory Catholic Church... View Obituary & Service Information

The family of Kenneth "Kenny" LeRoy Hansen created this Life Tributes page to make it easy to share your memories.

Kenny LeRoy Hansen, age 73, of Marshall and formerly of Lucan,...

Send flowers to the Hansen family.