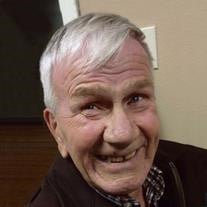 Kenneth Wajer, age 81, of Lynd, Minnesota passed away on Thursday, September 15, 2016, at the Prairie Home Hospice House in Marshall, Minnesota. Funeral Services are 11:00 AM Tuesday, September 20, 2016, at First Lutheran Church in Marshall. Interment will be later that day in the Lynd City Cemetery. Visitation will be held from 4:00 – 8:00 PM on Monday, September 19, 2016, at the Hamilton Funeral Home in Marshall. Prayer Service will be at 7:00 PM. Visitation will continue one hour prior to the service, from 10:00 – 11:00 AM Tuesday, at First Lutheran Church in Marshall. Clergy Officiating: Rev. Julie McCain Casket Bearers: Ken’s grandchildren ~ Sami Garness, Cassie Garness, Dustin Garness, Ashley Nowotny, Brandi Louwagie, Melissa Brown, Matt Wajer Military Honors: Marshall American Legion ~ Post #113 Kenneth LaVerne Wajer was born on May 7, 1935 in Dundee, Minnesota. He was the son of John and Elizabeth (Rempt) Wajer. Ken was baptized Dec 20, 1957, at Salem Lutheran Parsonage in Comfrey and was later confirmed on June 9, 1959, at Zion Lutheran Church in Iona. In 1936, his family moved to a farm south of Slayton where he grew up. He attended country schools through the 8th grade. He went on to do farm work with his parents and other area farmers. Ken enlisted on April 19, 1956, and served in the United States Army and Reserves until his honorable discharge on July 3, 1962. On May 18, 1958, Ken was united in marriage to Deloris Lingbeck at Salem Lutheran Church in Comfrey. The couple made their home in Worthington and then Iona where Ken worked for John Scheuring for 7 years. They then moved to Lynd and Ken worked for Harold Jorgensen for 11 years before taking a job as a truck mechanic for Cliff Viessman Trucking. He worked there for over 30 years until his retirement on December 31, 2005. The couple spent over 58 years of marriage together and raised four children: Michael, Scott, Brian, and Brenda. In addition to farming and his mechanic work, Ken also enjoyed bowling, hunting, fishing, and the Minnesota Twins. He was always positive, a jokester and the life of the party. He cherished the time he spent with family. Ken was also a faithful member of First Lutheran Church in Marshall. Kenneth entered his Heavenly home on Thursday, September 15, 2016, in Marshall, Minnesota at the age of 81 years, 4 months and 8 days. Blessed be his memory. Ken is survived by his wife, Dee Wajer of Lynd; four children, Michael (and Karen) Wajer of Hartford, SD, Scott (and Michelle) Wajer of Marshall, Brian Wajer of Maple Grove, Brenda (and Jack) Garness of Crooks, SD; seven grandchildren, Matt Wajer of Hartford, SD, Melissa (and Jon) Brown of Sioux Falls, SD, Brandi (and Justin) Louwagie of Cottonwood, Ashley (and Brett) Nowotny of Sioux Falls, SD, Dustin (and Hezel) Garness of Hartford, SD, Cassie Garness of Crooks, SD, Sami Garness of Crooks, SD; two great-grandchildren, Cohen and Tinley Louwagie, and another on the way; sister, Rose (and Cliff) Viessman of Dawson; nephews, nieces, other relatives and many friends. He was preceded in death by his parents, John and Elizabeth Wajer; brother, John Wajer; sister, Viola Lamb; half-brothers, Bill Tuynman, Harold Tuynman, Lawrence Tuynman; half-sisters, Amanda Embree and Margaret Tuynman. The family invites everyone to a luncheon immediately following the service.

The family of Kenneth LaVerne Wajer created this Life Tributes page to make it easy to share your memories.

Kenneth Wajer, age 81, of Lynd, Minnesota passed away on Thursday,...

Send flowers to the Wajer family.