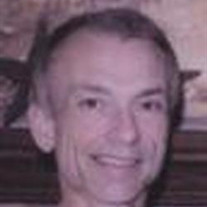 Marshall: Kevin Jon Magnuson of Marshall, passed away at Prairie Home Hospice House, on Monday, February 17, 2014. Funeral services will be held 2:00 P.M. Friday, February 21st at First Baptist Church of Marshall. Visitation will be held Thursday from 4:00 to 8:00 P.M. at Hamilton Funeral Home. Visitation will continue at the church on Friday one hour prior to the service. Burial will be in the Marshall Cemetery. Kevin Jon was born on August 10, 1960 in Marshall to parents Donald and Karen (Emerson) Magnuson. He was baptized and confirmed in the Lutheran faith. Kevin attended Marshall Public Schools, graduating in 1978. He continued his education at Minnesota West in Granite Falls where he obtained a degree in Mechanical Drafting. Kevin began his working career learning auto body repair at his Father's business, Don's Body Shop. After graduating from MinnWest, he moved to the Twin Cities where he was employed at MAACO for several years. He then returned to Marshall to work along side his Dad. After Don passed in 1992 Kevin continued to run the business. Later on Kevin was employed by different local businesses including Jonti-Craft, Hi-Rel and Schwans. Kevin enjoyed remodeling projects and was very good at them. He loved yard work and could nurse any plant back to health. Kevin was a very caring individual. He had a great sense of humor. He was always ready with a joke and loved to tease his nieces and nephew. Kevin loved music, especially Fleetwood Mac and Stevie Nicks. He also enjoyed spending time at the lake and was a Chrysler car enthusiast. Kevin passed away in the early morning hours of Monday, February 17, 2014 at Prairie Home Hospice House. He had reached the age of 53 years, 6 months and 7 days. He is survived by his mother, Karen; his siblings, Kyle (Susan) of Garvin, Donna and Kim of Marshall, and Rick (Kelly) of Richfield; nephew Jake Magnuson and nieces Jessie Magnuson and Karisa (Larry) Larsen, and several other relatives and friends. Kevin was preceded in death by his father, Donald Magnuson; grandparents Richard and Bergitte Magnuson, Kenneth and Norma Emerson and aunts and uncles. Blessed Be Memory of Kevin Jon Magnuson.

The family of Kevin Magnuson created this Life Tributes page to make it easy to share your memories.

Marshall: Kevin Jon Magnuson of Marshall, passed away at Prairie...

Send flowers to the Magnuson family.