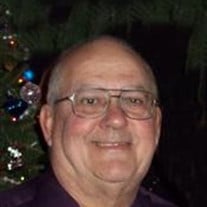 Cottonwood: Gene L. VanDeVeire, age 67, of Cottonwood, passed away unexpectedly at his residence on Tuesday, September 20, 2011. Funeral services will be 2:00 P.M. Saturday at St. John’s Evangelical Lutheran Church in Wood Lake. Burial will be in the church cemetery. Visitation will be 5:00 P.M. to 7:00 P.M. with a 6:45 P.M. prayer service at the church on Friday. Visitation will continue at the church on Saturday, one hour prior to the service. The Hamilton Funeral Home is in charge of the arrangements. Gene Louis was born on April 16, 1944 in Wood Lake, Minnesota to parents Cyriel “Zeke” and Hannah (Bahn) VanDeVeire. He was baptized and confirmed at St. John’s Evangelical Lutheran Church in Wood Lake. Gene graduated from Cottonwood High School in 1962. On January 22, 1972, Gene was united to his best friend Betty Brouwer at the Christian Reformed Church in Clara City. He worked for PPG Ind. for 20 years. The last few years he grew pumpkins, squash and delicious watermelons and would share with whomever would enjoy the fruits of his labor. His lawn and all the upkeep also kept him busy. He also enjoyed watching his son-in-law, Brandon, race at the Monte track and they would take the motor home and follow the racing team to bigger races. The love of his life was his family especially watching his grandsons in sports and his granddaughter Emma in dance. His other enjoyments were watching the Minnesota Twins play, NASCAR racing, spending time at the lake with his family and his constant companion, Fuzzy. He also was a member of the Cottonwood Fire Department for 25 years. Everyone knew him as “Geno” or “Grandpa Geno.” Gene passed away at his home on Tuesday, September 20, 2011. He had reached the age of 67 years, 5 months and 4 days. He is survived by his loving wife, Betty of Cottonwood; four daughters, Veronica Jo (and Bill Robinson) of Lloyd, MT, Tracie Lee Johnson of Lloyd, MT, Nicole Lynn (and Brandon Jacobson) of Hanley Falls, and Mindy Lou Laleman (and Aaron Hofer) of Cottonwood; seven grandchildren, Colton, Dakota, Hunter, Bolden, Emma, Tabatha and Dillon; sister, Janna (and Marc) Milbradt; and many other relatives and friends. He was preceded in death by his parents; granddaughter, Kaile Nicole; grandson, Andrew Richards; two son-in-laws, Dan Haugen and Mike Laleman; and Jori Ann Magnuson. Gene was a life long member of St. John’s Evangelical Lutheran Church. His faith was very important to him and on February 14, 1990 Gene and Betty accepted Jesus Christ as their Lord and Savior. Gene always tried to show the love of Jesus to everyone he met. He never forgot to say, “I Love You,” to his family before going out the door. Blessed be the memory of Gene L. VanDeVeire.

The family of Gene L. VanDeVeire created this Life Tributes page to make it easy to share your memories.

Send flowers to the VanDeVeire family.