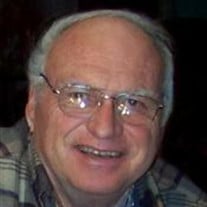 Funeral services for Larry Leach of Milroy will be held on Tuesday, June 14, 2013, at 10:30 a.m. at the Ashford Presbyterian Church in Milroy. Visitation will be 5:00 p.m. to 8:00 p.m. with a 7:00 p.m. prayer service Monday at the Hamilton Funeral Home in Marshall. Visitation will continue at the church on Tuesday, one hour prior to the service. Burial will be in the Milroy City Cemetery Military Honors will be provided by American Legion Post 247 of Milroy. Larry Dean Leach, 74, was welcomed home to Our Lord on Friday morning, June 7, 2013, at his residence in rural Milroy. Larry was born February 26, 1939, in Marshall, MN. He was the only child of William Mayo and Bertha (Urke) Leach. Larry grew up on a farm near Milroy, MN. While still in high school, he joined the reserves and began his training. Larry graduated from Milroy Public School in 1957. That summer, he joined the military, entering into the U.S. Naval Air. Larry proudly served his country from 1957 to 1962. He was discharged with honors for his devoted performance. After the service, Larry worked on the missile sites in the Seattle, Washington area. It was there that he met his future wife, Leila Wille, from Lamberton, MN. Larry married Leila at Our Savior's Lutheran Church, in Lamberton on October 19, 1963. They lived for a short time in rural Vesta and Seaforth before settling into their house on the family farm where Larry had been raised. Larry was a very loving husband, and it was rare to see him without Leila by his side. Larry was looking forward to celebrating their fiftieth anniversary this fall. Larry and Leila raised three sons: Daniel, Daryl, and David. Larry will be remembered for showing his children how to lead a simple, yet meaningful life. He had a deep faith in Our Lord, and his quiet, selfless ways taught his children to be kind and open hearted. All three boys farmed with Larry until he retired in 2010. He continued to take an active interest in farming, and he made daily trips to the Milroy Farmer's Coop Elevator. Larry cherished his grandchildren. He spent many hours reading to them, and sharing his joys of gardening, cooking, and watching cartoons. Larry loved to watch the eagles and feed the pheasants, and he taught his grandchildren the names of the various finches and orioles that visited his bird feeders. His love will live forever in their hearts. Larry attended the Milroy Ashford Presbyterian Church. He was active in the church where he served as an elder. He helped out with everything from washing dishes to recordkeeping to leading special prayers. He especially enjoyed visiting with other members of the church each Sunday after services. Larry was an assessor for Westline Township in Redwood County in the 1980's. He was a member of the Milroy American Legion, and he was a lifetime member of the Disabled American Veterans (DAV), first serving as a secretary and then as a treasurer. Larry is survived by his wife, Leila; sons, Daniel (Kim), Daryl (Karen), and David (Stephanie) all of Milroy; fifteen grandchildren; brother-in-law, Kenneth (Kathy) Wille of Florida and sister-in-law, Elaine Wille of Nevada. He was preceded in death by his parents, his mother and father-in-law, and his brother-in-law, Lester Wille. "Surely goodness and mercy shall follow me all the days of my life: and I will dwell in the house of the Lord forever." Psalm 23:6. Blessed Be The Memory Of Larry Dean Leach.

The family of Larry Dean Leach created this Life Tributes page to make it easy to share your memories.

Funeral services for Larry Leach of Milroy will be held on Tuesday,...

Send flowers to the Leach family.