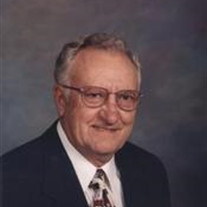 Marshall: Larry A. Roeder, age 83, died at his residence in Marshall after a short battle with cancer on Tuesday, October 22, 2013. Funeral services will be 10:30 A.M. Saturday, October 26th at Christ Evangelical Lutheran Church. Visitation will be 4:00 P.M. to 8:00 P.M. Friday at the Hamilton Funeral Home and will continue at the church on Saturday, one hour service. Burial will be in the Knollwood Memorial Garden Cemetery in Fergus Falls. Larry Armond, the son of Herman and Irma (Madenwald) Roeder was born in Hawkinson, ND on August 27, 1930. He was baptized and confirmed at Emmanuel Church of Christ. He graduated from Hankinson High School 1948. He continued his education Wahpeton State School of Science. On September 3, 1957, Larry was united in marriage to Shirley Tenney in Watertown, South Dakota. They were blessed three children were born, namely, Nancy, Michael and Patti. Larry worked as an accountant for O’Connell Ford, Southwest Ford and Taylor Lumber. His enjoyments were bowling, golfing at the Cottonwood Country Club, playing cards and card games with his family and “Snowbirding” for seven years in Edinburg, TX. Larry was a very devout Christian and loved his family very much. Larry will be sadly missed by his loving wife, Shirley of Marshall; three children, Nancy Mickelson, of Arlington, TX, Michael Roeder, of Union City, CA and Patti Smith, of Sioux Falls, SD; four grandchildren, David Mickelson, Lisa Parker, and Joshua and Bradley Smith; three great-grandchildren, Izabella Mickelson, Macy Parker and Lydia Smith; sister, Delores Madenwald, of Hankinson, ND; brother, Orville Roeder, of Walla Walla, WA; and many other relatives and friends. He was preceded in death by his parents; brothers, Rolland, Willmer, Duane and Clifford; and sister, Leona Vedder. Larry was an active member of Christ Evangelical Lutheran Church in Marshall. Blessed be the memory of Larry Roeder.

The family of Larry Roeder created this Life Tributes page to make it easy to share your memories.

Marshall: Larry A. Roeder, age 83, died at his residence in Marshall...

Send flowers to the Roeder family.