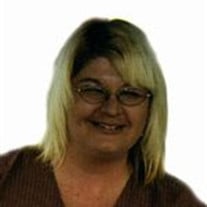 Marshall: Laura Jo St. Clair Hovdesven, age 37, of Marshall, beloved mother of Jared Hovdesven, sister of Kathryn Swan, and treasured daughter of Gary and Juli St. Clair and Mary Swan went home to her Heavenly Father peacefully in her sleep on Sunday, December 9, 2007. Funeral Services are scheduled for 10:00 A.M. on Thursday, December 13 at Wesley United Methodist Church in Marshall. Visitation will be on Wednesday, December 12, at the Hamilton Funeral Home from 5 to 7 P.M. with a prayer service at 7:00. Visitation will continue one hour prior to the service on Thursday, at the church. Laura Jo St. Clair was born on April 9, 1970, to Gary and Mary (Wiele) St. Clair in Burlington, Iowa. She was baptized at the United Church of Christ in Burlington. Laura then came to Marshall, where she graduated from Marshall High School in 1988 and then Southwest State University in 1995. She worked in advertising sales at the Marshall Independent from 1995 to 2007 and at Schwan's for the last year. Laura's enjoyments in life were reading, watching TV, the computer, fishing, being a wonderful mother, and spending time with family and friends. Laura Jo St. Clair died Sunday, December 9, 2007 at her residence. She hadreached the age of 37 years and 8 months. Laura is survived by her son, Jared Hovdesven of Marshall; parents, Gary (and Juli) St. Clair of Marshalltown, Iowa, and Mary Swan of Tipton, Iowa; sister, Kathryn Swan (and John Kummer) of the Twin Cities; step-siblings, Lisa Rider of Estherville, Iowa, Traci Daniels of Marshalltown, Iowa, and Ryan (and Carmen) Daniels of Ludwigshafen, Germany; aunts and uncles, Stanley (and Nell) St. Clair of Ft. Madison, Iowa, Heiress (and Don) Reu of Ft. Madison, Iowa, and Jonathan (and Beverly) Cooper-Wiele of Boston, MA; special friend, Linda Buysee of Marshall; and many other relatives and friends. Laura was preceded in death by her grandparents, Les and Laura Wiele and Jim and Josephine St. Clair. Blessed be the memory of Laura Jo St. Clair Hovdesven.

The family of Laura Jo St. Clair Hovdesven created this Life Tributes page to make it easy to share your memories.