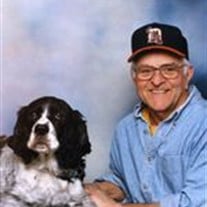 Lawrence “Larry” Curwick, age 70, of Minneota, passed away at the Minneota Manor on Wednesday, March 18, 2009. Funeral services will be at 2:00 P.M. Saturday, March 21, 2009 at Wesley United Methodist Church in Marshall. Burial will be in the Marshall Cemetery. Visitation will be held at the Hamilton Funeral Home on Friday evening, March 20, from 5 to 8 P.M. with a prayer service at 7:30. Visitation will continue one hour prior to the service on Saturday, at the Church. Lawrence Orville Curwick was born to parents Leo and Mary (Baert) Curwick on September 14, 1938 in Ghent, Minnesota. Larry was baptized and confirmed in the Catholic faith. He attended St. Eloi School in Ghent, then on to a career as an auto mechanic. Working for O’Connell Motors in Marshall, he became a certified and highly skilled mechanic. Larry then opened up his own shop, Curwick’s Garage, in 1968. He would continue to love his career throughout his life. Lawrence met and married Janet Stava, and to this union three children were born, Kenneth, David and Diane. Larry had two more children, Cindy and Stephanie, with his second wife, Judy Oestreich. Larry’s enjoyments in life included flying, hunting, fishing, spending time with his dog Wags, classic cars and his work as a mechanic. He was a member of the classic cars club - Shades of the Past, Pheasants Forever and the Sportsman’s Club. Larry passed away on March 18, 2009 at the age of 70 years, 6 months and 4 days. He is survived by his significant other, June Carter of Marshall; children, David (and Diane) Curwick of Rexford, New York, Diane (and Tim) Rivas of Victoria, Cindy (and Adam) Titelbaum of Fort Collins, Colorado, and Stephanie Curwick of Seattle, Washington; grandchildren, Elizabeth and James (Curwick), Savanna and Austen (Rivas), and Maddie, Jonny and Ben (Titelbaum); siblings, Eileen Thanghe of Winsted, Alverna DeRoode of St. Paul, Bernard Curwick of Madison, WI and Arizona, Marie Sullivan of Marshall, Edward (and Joyce) Curwick of Bishop, CA, Kathleen Drown of Minneota, LeRoy (and Kay) Curwick of Brooklyn Park, Virginia and Don Steinfadt of Vinton, IA, Valerie (and Tom) Jacob of Woodbury; over 50 nieces and nephews; and many other relatives and friends. He was preceded in death by his infant son, Kenneth Michael, sister, Libby Nemitz Berckes, and his beloved dog and constant companion, Wags. Blessed Be The Memory of Lawrence “Larry” Curwick.

The family of Lawrence "Larry" Orville Curwick created this Life Tributes page to make it easy to share your memories.

Lawrence “Larry” Curwick, age 70, of Minneota, passed away at...