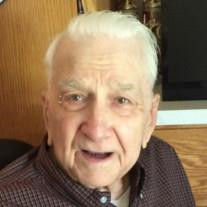 Lawrence Sik, Sr., age 95, of Tracy and formerly of Milroy, Minnesota, passed away Monday, July 27, 2015, at Prairie View Healthcare Center in Tracy. Mass of Christian Burial is 10:30 AM Thursday, July 30, 2015, at Holy Redeemer Catholic Church in Marshall. Following the luncheon, interment will follow in the St. John Cantius Catholic Cemetery in Wilno. Visitation will be from 5:00 – 8:00 PM Wednesday, July 29, 2015 at the Hamilton Funeral Home in Marshall with a prayer service scheduled for 7:30 PM. Visitation will continue one hour prior to the service, from 9:30 – 10:30 AM, on Thursday at the church. Clergy Officiating: Rev. Father Paul Wolf Organist: Pam Haukom Congregational Hymn: “Here I Am Lord,” “Amazing Grace,” “How Great Thou Art,” “On Eagle’s Wings,” “Old Rugged Cross,” Special Music: Resurrection Choir - Avon Hess, Director Casket Bearers: Lawrence’s sons - Larry Sik, Laron Sik, Lanny Sik, LuVerne Sik, LeRoy Sik, Lydell Sik Lawrence Alvin Sik was born on July 2, 1920 in Hansonville Township, Canby, Minnesota. He was the son of Frank and Theresa (Petlaviska) Sik. Lawrence was baptized, received his first communion, and was confirmed at the Catholic Church in Wilno. He attended country school before helping on the family farm. On January 20, 1953, Lawrence was united in marriage to Darlene Westley in Wilno. The couple spent 16 years together and had 9 children. Lawrence lived in Ivanhoe, Lynd, and Marshall before settling in Milroy in 1992. When he needed more assistance with his daily care, Lawrence moved to Prairie View Healthcare Center in Tracy at age 91. Lawrence farmed in the 1950s and then drove truck for Marshall Processing and Central-BI. He also worked several odd jobs to stay busy and help others as needed. Lawrence was a member of Holy Redeemer Catholic Church in Marshall. He was known to be a great cook, and babysitter for the grandchildren he loved so much. He loved to fish and spend time camping outdoors. He would constantly fix things left in the garage and would do anything to help someone in need. He will be remembered as having his ear on the police scanner and Polka music, often at the same time. Lawrence Sik, Sr., entered his heavenly home on Monday, July 27, 2015 at the age of 95 years and 25 days. Blessed be his memory. Lawrence is survived by his children, Larry (Marcia) Sik of Marshall, Laron (Jean) Sik of Mankato, Darla (Dan) Christensen of Milroy, Lanny (Diane) Sik of Milroy, LuVerne (Peggy) Sik of Elbow Lake, Dorene (Jim) Guza of Litchfield, LeRoy Sik of Milroy (and special friend, Janice Van Overbeke), Diane (Dale) Bille of Watertown, SD, Lydell (Terri) Sik of Lamberton; Lawrence is preceded in death by his parents, Frank and Theresa Sik; mother of his children, Darlene Sik; great-granddaughter, JanNesa Vought; and siblings, Clem Sik, Jerome Sik, Donald Sik, Marian Ertz, Irene Drietz, Regina Lozinski, and Leona Sovell. The family invites everyone to Carlin Hall following the service for a luncheon.

The family of Lawrence Alvin Sik Sr. created this Life Tributes page to make it easy to share your memories.

Send flowers to the Sik family.