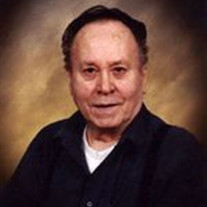 LeRoy Elton, age 78, of Lynd, passed away on Friday, April 17, 2009 at his residence under hospice care. Funeral services are scheduled for 11:00 AM on Wednesday, April 22, 2009 at Albright United Methodist Church in Marshall. Visitation will be held from 5 to 8 PM with a prayer service at 7:00 PM on Tuesday, April 21, at the Hamilton Funeral Home in Marshall. Visitation will continue one hour prior to the service on Wednesday, at the church. Burial will be in the Lynd City Cemetery. Condolences may be submitted at www.hamiltonfh.com. Selmer LeRoy Elton was born to Selmer and Bessie (Corehouse) Elton on September 1, 1930 in Minneota, Minnesota. He was baptized and confirmed in the Lutheran Church. LeRoy attended school in Lynd through the first grade and then attended Marshall Schools and graduated from Marshall High School. He lived in Minneota, Marshall, and Williston, North Dakota. On August 29, 1953 LeRoy married Diane Turcotte in Williston, North Dakota. In North Dakota, LeRoy worked for Smitt Construction. Then in 1959, LeRoy and Diane moved to Lynd, Minnesota, for his remaining years. He worked as construction foreman and superintendant of commercial buildings with Rowe and Nielsen, Grams Inc., Dulas Construction, and Ossning New York. He retired in 1994 at the age of 62. LeRoy loved his friends, bowling on a mixed doubles league, pool – he was an avid pool player in his younger years, playing cards, fishing, and spending time with family and friends – especially the grandkids. LeRoy loved and faithfully tended to a beautiful garden. He was also proud of the fact that he taught all of his children and his wife how to drive. LeRoy also loved his faithful companion, his dog, Alex. Later in life he grew just as close to Abby. LeRoy was a past member of the Eagles’ Club and the American Legion Post #113. LeRoy passed away peacefully on April 17, 2009 at the age of 78 years, 7 months and 16 days. He is survived by his wife, Diane Elton of Lynd; five children, Dianna Elton-Whingelby (and Paul) of Lynd, Robert Wayne Elton (and Karin) of Marshall, Roxie Elton-Kueffler (and Curtis) of Meridian, Idaho, Laurie Ann Elton-Clark (and Dan) or Ruthton, and LeRoy Elton Jr. (and Trudy) of Arco; 17 grandchildren, Scott Kurvers, Robert Thomas Elton, Robert Lance Elton, Adrian Kjorness, Jacob Elton, Vanessa & Cheyenne Elton, Ryan Kueffler, Matthew Kueffler, Amy Casey, Melissa Hunsley, Samantha Ramert, Kimberly Ostgaard, Tucker Elton, Triston Elton, Gabriel Elton, and Garrett Elton; 19 great-grandchildren; siblings, Betty Lou (and Les) Howen of Des Moines, Iowa, Robert Duane (and Sue ) Elton of Greeley, Colorado, and Darlene (and Dennis) Lemberg of Oakdale; and many other nieces, nephews, cousins, aunts, and uncles. LeRoy was preceded in death by his grandparents; parents, Selmer and Bessie Elton; daughter, Nancy Gale Ramert; granddaughter, Jody Diane Turcotte, and brother, David. Blessed be the memory of LeRoy Elton.

LeRoy Elton, age 78, of Lynd, passed away on Friday, April 17, 2009 at his residence under hospice care. Funeral services are scheduled for 11:00 AM on Wednesday, April 22, 2009 at Albright United Methodist Church in Marshall. Visitation will... View Obituary & Service Information

The family of LeRoy Elton created this Life Tributes page to make it easy to share your memories.

Send flowers to the Elton family.