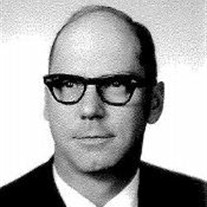 Funeral services for Leander (Turk) Ahmann will be Saturday, June 1, at 10:00 AM at Christ United Presbyterian Church. Lee “Turk” Ahmann was born July 21, 1919, in Lynd, MN to Henry and Minnie Ahmann. Turk married Dorothy (DoAnn) Jefferson on November 30, 1945, in Watertown, SD; the couple had sons Dave and Jim and began their life in earnest. Always in attendance at the boys’ events and actively involved in their community, the Ahmanns also combined Turk’s brawn and Dorothy’s brains to successfully manage Murphy Motor Freight Lines from their Marshall home for many years. A civic-minded and community-oriented man, Turk served on the City Council and various committees and boards throughout his life. His involvement as a volunteer firefighter led to his also serving as Fire Chief for the city of Marshall. Those who knew him well would say that Turk’s bark was much worse than his bite. Although he took his work seriously, Turk would have dropped everything (on your foot if he thought you were moving too slowly) to help a friend in need. A man of legendary strength, Turk recently verified the story of single-handedly moving a piano up a flight of stairs. The true essence of Turk Ahmann, however, was revealed in his passions; whether it was collecting cans (and various other treasures), fishing, golfing, playing cards, arriving punctually at HyVee at 4 AM, keeping every picture of his grandkids he was ever given, telling stories about the good old days, listening to his TV at top volume, ignoring the phone unless the “special code” was heard, or teasing Dorothy, Turk never left a job unfinished. His characteristic smirk and twinkle in the eyes was a sure sign that he was enjoying himself and the company of those around him. A grandpa to top all grandpas, Turk had three granddaughters and one grandson in the palm of his hands for years. He delighted in giving the grandkids “garage treasures” they could take home and share with their parents. Once when Dave was about to throw one such treasure away, his daughters said, “Why bother, Dad? Grandpa is just going to bring it back and give it to us next week!” In what can only be described as the ultimate love story, Turk passed away a few days before the family was to return to Marshall for Dorothy’s funeral. Although he had set a goal of living to be 100, Turk was ready to go out with his wife for one last journey. Turk is survived and deeply missed by his sons Dave (Sue) and Jim (Deb) and his grandchildren Martie, Kellie, Ellie, and Tom. Blessed be his memory.

The family of Leander "Lee" Lawrence "Turk" Ahmann created this Life Tributes page to make it easy to share your memories.

Funeral services for Leander (Turk) Ahmann will be Saturday,...