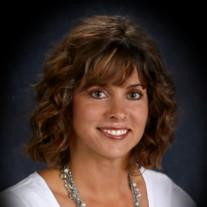 Leann Mary Klein, age 41, of Marshall, died peacefully and surrounded by family on Wednesday, August 19, 2015, at her home in Marshall. Memorial services are 10:30 AM, Monday, August 24, 2015, at Holy Redeemer Catholic Church in Marshall. Private family interment will be at a later date. Visitation will be held from 4:00 – 8:00 PM Sunday, August 23, 2015 at Holy Redeemer Catholic Church in Marshall. A rosary will be held at 4:00 PM and a prayer service is scheduled for 7:00 PM. Visitation will continue one hour prior to the service, from 9:30 – 10:30 AM, on Monday again at the church. Leann Mary Neisius was born on November 14, 1973, in Marshall, Minnesota to LeRoy and Diann (Reed) Neisius. Leann was baptized, received first communion, and was confirmed at St. Mary’s Catholic Church in Cottonwood, Minnesota. She grew up attending school in Clarkfield which later combined with Granite Falls. She graduated from GFC High School with the class of 1992. She furthered her education at South Dakota State University and became a Registered Nurse. On November 29, 1996, Leann was united in marriage to Jason Klein at St. Clotilde Catholic Church in Green Valley. The couple spent over 18 years together and raised three children, Rebecca, Nicholas, and Emma. Leann and Jason made their home in Sioux Falls where Leann worked for Select Specialty Hospital and Sioux Valley Hospital. They moved to Willmar in 1998, where she worked at Rice Memorial Hospital. In 2001, the family moved to Marshall and Leann worked as a nurse as well as a clinical instructor for Minnesota West Community College at Avera Marshall Regional Medical Center. In her youth, Leann was active in school and in the community where she developed lifelong friends. She excelled in both volleyball and basketball. 4-H was a big part of her life and she loved to bake bread, sew, and ride horse. Leann attended the State Horse Show many times in barrel racing. When the farm chores were done (or when they could sneak away) Leann and her siblings put many miles on the 4-wheelers, go-carts, and riding horse. Leann rarely passed up an opportunity to go on a family fishing trip. Lots of memories were made playing with cousins and close family friends. Leann's favorite place to be was at their cabin on Eagle Lake where she loved to be on the patio, in the boat, or in the kitchen entertaining guests. Attending her children's activities was a priority for her. One of Leann's favorite volunteer opportunities was spending a week each summer as a cabin nurse at MS camp with her dad. She also touched many lives on a mission trip with Jason to Haiti. Leann was active in the Southwest Figure Skating Club in Marshall. Many days each week were spent working out at the Y and going out for coffee or lunch with friends. During the summer, she enjoyed gardening and canning the produce. In the winter, Leann looked forward to traveling where she could soak up the sun and feel the sand between her toes. She and her family were fortunate to travel to both Switzerland and Sweden to visit their foreign exchange students, Luis and Malin. Leann never let her cancer diagnosis get in the way of raising her family, helping others, or planning her next vacation. Despite her untimely death at the age of 41 years, 9 months and 5 days, Leann was blessed to live a full life. She died on Wednesday, August 19, 2015, in Marshall, Minnesota. Leann is survived by her husband, Jason Klein of Marshall, and their children, Rebecca (18), Nicholas (16), and Emma (12); parents, LeRoy and Diann Neisius of Marshall; Jason's parents, Jerry and Judi Klein of Dell Rapids, SD; siblings, Paul (and Julie) Neisius of Hanley Falls, and their children Mitchell and Jack; Laura (and Jon) Scheer of South Haven, and their children Jessica, Noelle, Kara, and Rachel; Dan Neisius (and Jamie Benaquis) of Navarre, FL and her children Aiden and Ashlynn several brothers and sisters-in-law; Joe (and Nici) Klein of White, SD, and their children Evelyn, Jeanette, Catherine and Raymond; Jeff (and Sara) Klein of Wichita Falls, TX and their children Savannah, Lillian and Natalie; Josh (and Pam) Klein of Highlands Ranch, CO and their children Kolby, Jaden and Tanner; Jake (and Amber) Klein of Plymouth and their children Madelyn, Aaron and Hailey; Jeremy (and Clarissa) Klein, stationed at Ramstein AFB Germany; other relatives, and many friends. She was preceded in death by her grandparents, Orrin and Mary Reed, and Ralph and Mary Neisius. In lieu of flowers, please designate memorials to Prairie Home Hospice of Marshall or charity of your choice. The family invites attendees to Carlin Hall for a luncheon immediately following mass.

The family of Leann Mary Klein created this Life Tributes page to make it easy to share your memories.

Send flowers to the Klein family.