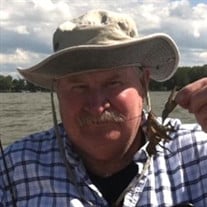 Lee Wyffels, age 73, of Marshall, Minnesota, died on Monday, February 7, 2022, at the Avera Regional Medical Center in Marshall, Minnesota. Funeral Services will be 3:00 p.m. Saturday, February 12, 2022, at St. Stephen Lutheran Church in Marshall. Full military honors will be presented prior to a reception for attendees. Visitation will be held on Friday, February 11, from 4:00 – 8:00 PM, with a prayer service at 7:30 PM, at the Hamilton Funeral Home in Marshall. Visitation will continue one hour prior to the service on Saturday, from 2:00 p.m. until the time of services at 3:00 p.m., at the church. Lee Alan Wyffels was born on May 4, 1948, to Edward and Ida (Hennen) Wyffels in Marshall, Minnesota. He was raised on the family farm near Ghent, Minnesota, and helped with the daily chores, raising cattle and chickens, and in crop production. Lee attended school at St. Eloi Catholic School in Ghent, Minnesota, through the eighth grade. He then attended Central Catholic High School in Marshall, graduating with the class of 1966. Lee furthered his education by enrolling into the drafting program at the vocational school in Granite Falls, Minnesota. His schooling was interrupted as he was drafted into the United States Army in 1969. Lee served as a medic corpsman in the Vietnam War. He was honorably discharged in 1970. Lee then returned home and went to work for Appleton Silo and other various jobs. In the early 1970s he began his career with Speedway Moving and Storage based out of Marshall. He formally retired in 2013. Lee was married in 1988 and was blessed with two daughters. He and his wife later divorced. In 2000, Lee began a relationship with Amy Hefti, and they spent a wonderful 22 years together. In 2014, Lee was diagnosed with Multiple Myeloma Cancer. He aggressively fought his cancer until Monday, February 7, 2022, when he passed away surrounded by his family and friends at the Avera Marshall Regional Medical Center at the age of 73 years, 9 months, and 3 days. Lee was a member of St. Stephens Lutheran Church in Marshall. He was a charter member of Lyon County Pheasants Forever Chapter and served in various capacities throughout the years. Lee loved fishing, pheasant hunting, collecting knives and lead soldiers, snacking on his Cheetos, and avidly watched baseball, football, and Judge Judy on television. He spent the majority of his retirement gardening and selling produce as a vendor at local farmers’ markets. Lee is survived by his life partner, Amy Hefti of Marshall; daughters, Alanna (Antony) Verhelst of Sneads Ferry, NC, Mareva Wyffels of Gilbert, AZ; two step-daughters, Samantha Meyer of Lynd, Hilde Wyffels of Queen Creek, AZ; grandchildren, Garrett Maxwell, Collin Parker, Adeline Wyffels, Zelda Meyers, Roland Verhelst; a great-granddaughter, Nova Maxwell; 11 siblings, Sue (Ron) Christoperson of Rochester, Kathy (Tom) Kretschmer of Alexandria, Diane (Larry) Zavadil of Glenwood, Marcia (Bruce) Welch of Alexandria, Dede (John) Lea of Springdale, AR, Lisa (Tim) Vivian of Green Bay, WI, Mia (Peter) Steingas of Deephaven, Marc (Sandy) Wyffels of Marshall, Bernie (Lynn) Wyffels of Blaine, Chad (Sandy) Wyffels of Marshall, and Ward (Eve) Wyffels of Marshall; and numerous other family and friends. He was preceded in death by his parents. Memorials are preferred to the Lyon County Chapter of Pheasants Forever.

The family of Lee Alan Wyffels created this Life Tributes page to make it easy to share your memories.

Send flowers to the Wyffels family.