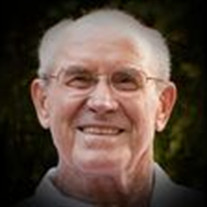 Marshall: Leland Larsen, age 70, of Marshall, passed away at his residence on Thursday, November 26, 2009. Mass of Christian Burial will be 10:30 A.M. Monday, November 30, 2009 at Holy Redeemer Catholic Church. Burial will be in the Calvary Cemetery. Visitation will be 4:00 P.M. to 8:00 P.M. with 5:00 P.M. prayer service Sunday at the Hamilton Funeral Home. Visitation will continue at the church on Monday, one hour prior to the service. Leland Howard Larsen was born to Casper and Ruth (Goodmonson) Larsen on September 27, 1939, in Tyler, MN. He was baptized at the Opdahl Lutheran Church in Florence and confirmed at Albright United Methodist Church in Marshall. While attending school, Leland was the only 8th grader, so he taught math to the younger students. He always proclaimed that he had to walk uphill both ways to and from school. He graduated from the Marshall High School in 1957. He entered the military on January 8, 1959, and served in the Air Force until honorably discharge on April 27, 1960. On June 24, 1961, Leland was united in marriage to Betty Wallace at Saints Peter and Paul Catholic Church in Ivanhoe. He worked for Heinie Miller and then Daryl Miller until starting his own masonry business. Betty died on May 28, 1983. On August 5, 1988, Leland was united in marriage to Linda Johnson at the Danebod Lutheran Church in Tyler. In 2002, Leland started working for KHC construction. Leland passed away at his residence on Thursday, November 26, 2009. He had reached the age of 70 years 1 month and 29 days. The love of his life was his family and attending the countless sporting events and music concerts involving his children and grandchildren. He also was the self-taught computer technician for them. Other enjoyments included fishing, hunting, camping, dancing, attending WeFest Festivals, annual trips to Branson to enjoy the country music and the Minnesota Vikings. He is survived by his wife, Linda of Marshall; mother, Ruth of Marshall; five children, Martie (David Klinkenborg) Larsen of Des Moines, IA, Pamela Esparza of Marshall, Susan Larson of Langford, SD, Anthony (Laurie) Larsen of Marshall and Timothy (Jill) Larsen of Aitkin; three stepchildren, Kelli Johnson of Willmar, Terri (Chris) Zent of Marshall and Cody Johnson of Minneapolis; 14 grandchildren, Meghan Klinkenborg, Andrew Klinkenborg, Paige Klinkenborg, Zachary Lovold, Cassandra Esparza, Maranda Esparza, Chase Larson, Mason Larson, Kade Larson, Morgan Larsen, Casper Larsen, Easton Larsen. Grace Larsen and Lauren Larsen; three sisters, Judy (Roger) Wartner of Marshall, Karen (Doug) Schuttler of Marshall and Kathy (Steve) Koch of Currie; also many other relatives and friends. He was preceded in death by his father, Casper; wife, Betty; daughter, Roben Larsen; and a baby sister. Blessed Be The Memory Of Leland Larsen

Marshall: Leland Larsen, age 70, of Marshall, passed away at his residence on Thursday, November 26, 2009. Mass of Christian Burial will be 10:30 A.M. Monday, November 30, 2009 at Holy Redeemer Catholic Church. Burial will be in the Calvary... View Obituary & Service Information

The family of Leland H. Larsen created this Life Tributes page to make it easy to share your memories.

Marshall: Leland Larsen, age 70, of Marshall, passed away at...

Send flowers to the Larsen family.