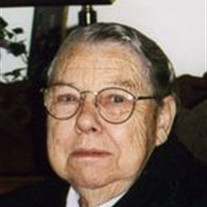 Lena H. Nelson, age 91, of Hendricks, passed away peacefully in her sleep at the Hendricks Hospital on Friday, May 15, 2009. Funeral services will be 10:30 A.M. Monday, May 18, 2009 at the Prairie Events Center in Marshall. Burial will be in the Blooming Prairie City Cemetery in Blooming Prairie, Minnesota. Visitation will be 4:00 P.M. to 7:00 P.M. Sunday at the Hendricks Hospital Chapel. Visitation will continue at the Prairie Events Center on Monday, one hour prior to the service. The Hamilton Funeral Home is in charge of the arrangements. Condolences may be submitted to www.hamiltonfh.com. Lena Nelson was born to Andrew and Eva (Eddy) Jensen on March 27, 1918 in Milroy Minnesota. She attended school at Milroy and completed the 8th grade. At the age of 18, she began doing house work. Then she moved to her uncle’s place to work where she met and later married Melvin Nelson on June 14, 1939 in Humbolt, Iowa. To this union four children were born, Martha, Harlan, Dean and Robert. They both worked at Art Larsen’s farm for five years and then went out on their own farm. During the second year of their marriage they met the Gospel and yielded their lives to serve the Lord. Lena passed away at the Hendricks Hospital on Friday, May 15, 2009. She had reached the age of 91 years, 1 month and 18 days. She leaves to mourn, her three children, Martha Nelson of Coon Rapids, Dean (Marilyn) of Owatonna, and Robert (Katrina) Nelson of Hendricks; eight grandchildren, Jennifer Nelson, Jeremy Nelson, Julie Nelson, Todd Nelson, Jacob Nelson, Darren Nelson, Spencer Nelson, and Monica Nelson; three great granddaughters, Brooklyn Nelson, Mari Nelson and Leighton Nelson; sister, Donna Lecy of Marshall; sister-in-law, Violet Bates of Fort Dodge, Iowa; cousin Lena Blake of Hendricks; also several nieces, nephews and a host of friends. She was preceded in death by her parents; husband, Melvin; one son, Harlan; three brothers, Ray, Dale and Manley; and a sister. Minnie.

Lena H. Nelson, age 91, of Hendricks, passed away peacefully in her sleep at the Hendricks Hospital on Friday, May 15, 2009. Funeral services will be 10:30 A.M. Monday, May 18, 2009 at the Prairie Events Center in Marshall. Burial will be in... View Obituary & Service Information

The family of Lena H. Nelson created this Life Tributes page to make it easy to share your memories.

Send flowers to the Nelson family.