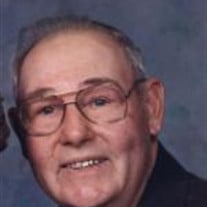 Skandia Township: Leon Anderson, age 92, of Marshall, formerly of Scandia Township, passed away at the Prairie Home Hospice House in Marshall on Thursday, January 13, 2011. Funeral services will be 10:30 A.M. Monday, January 17, 2011 at the Trinity Lutheran Church in Balaton. Burial will be in the Zion Lutheran Cemetery. Visitation will be one hour prior to the service at the church on Monday. Leon Wallace was born to parents Francis Phillip and Mathilda (Peterson) Anderson on February 23, 1918 in Flaxville, Montana. As an infant was baptized in the Lutheran faith in Flaxville and in his youth was confirmed at the Zion Lutheran Church. On May 1942 he entered the United States Army where he served in the Panama. He was honorably discharge on Nov 1945. Following his discharge he came back family farm in Scandia Township. On December 16, 1972, Leon was united in marriage to Juell L. Fitzsimmons. They made their home on the farm where they raised LaDonna. He served on Skandia Township board and was a faithful member of the Zion Lutheran church which he ushered and went on to be a faithful member of the Trinity Lutheran Church following the closing of Zion. The love of his life was his family and the farm. His other enjoyments were flowers and plants and the Minnesota Twins, volunteering at the Colonial Manor, playing Bingo at the Senior Housing, hunting pheasants and hunting in Montana. Leon passed away at the Prairie Home Hospice House in Marshall on Thursday, January 13, 2011. He had reached the age of 92 years, 10 months and 21 days. He is survived by his daughter, LaDonna (and David) Miller of Marshall; two grandchildren, Aaron Miller and Elizabeth Miller; three siblings, Selmer (and Mackie) Anderson of Litchfield, Pearl Rupp of Pipestone, and Opal Jenson of Greely, CO and sister-in-law, Bernice Anderson of Slayton; also many other relatives. He was preceded in death by his parents; wife, Juell on December 21, 1997, brother, Vernon Anderson; and sister, Luella Lewis Bless Be The Memory Of Leon W. Anderson.

The family of Leon Wallace Anderson created this Life Tributes page to make it easy to share your memories.