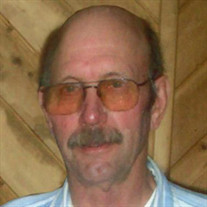 Leon Halling, age 81, of Ghent, Minnesota, died on Friday, June 4, 2021, at Boulder Creek Assisted living in Marshall, Minnesota. Memorial Services will be 11:00 a.m. Wednesday, June 9, 2021, at Christ United Presbyterian Church in Marshall. Interment with military honors will follow in the Marshall Cemetery. A Traditional Visitation will be held from 5:00 p.m. - 7:00 p.m. Tuesday, June 8, 2021, at the Hamilton Funeral Home in Marshall. Visitation will continue at the church on Wednesday, June 9, from 10:00 a.m. until the time of services at 11:00 a.m. Leon Clinton Halling was born to Clinton and Dorothe (Koser) Halling in Tyler, Minnesota, on February 2, 1940. He was baptized and confirmed in the Bethany Lutheran Church in Arco. Leon attended country school in district #24, and he transferred to Tyler schools graduating high school there with the class of 1958. He then began working and enlisted in the United States Navy and served as a mechanic. On October 23, 1965, Leon was united in marriage to Barbara Eilders at the Westminster Presbyterian Church in Worthington. The couple made their home in Marshall, Minnesota, and had two children. Leon worked for many years as a brick layer for commercial construction projects. In 1971, the family moved to their farm outside of Ghent. Following Barbara’s death just a couple months ago, as Leon needed more assistance his care, he moved to Boulder Estates and then Boulder Creek in Marshall. Leon was a member of Christ United Presbyterian Church and enjoyed camping, fishing, hunting, and working their hobby farm. He also spent many hours immersing himself in western themed TV shows and books. Leon Halling died on Friday, June 4, 2021, in Marshall, Minnesota, at the age of 81 years, 4 months, and 2 days. Blessed be his memory. He is survived by his children, Denise (Owen) Prellwitz of Marshall, Wayne (Larissa) Halling of Bemidji; grandson, Jordan Prellwitz (Deena Weber) of Marshall; brother, John (Karen) Halling of Granite Falls; other relatives, nieces, nephews, and friends. Leon was preceded in death by his wife, Barbara Halling; and parents, Clinton and Dorothe Halling.

The family of Leon Clinton Halling created this Life Tributes page to make it easy to share your memories.