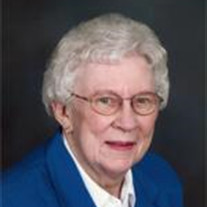 Marshall: Leona R. Hefti, age 89, of Marshall, formerly of Le Center, passed away at the Colonial Manor Care Center in Balaton on Wednesday, December 29, 2010. Funeral services will be 2:00 P.M. Sunday, January 2, 2011 at St. Stephen Lutheran Church in Marshall. Burial will be in the Marshall Cemetery. Visitation will be one hour prior to the service at the church on Sunday. Leona Rocelia was born to John and Marie (Olson) Gutterman on December 4, 1921 in Glenwood. She was baptized and confirmed in the Lutheran faith. She attended country school at Red Top School and in 1939, she graduated from Russell High School. On October 26, 1947, Leona was united in marriage to Roy Hefti at First English Lutheran Church in Marshall. Leona was a homemaker who had several part time jobs which allowed her to be at home with her family. In 1970, the couple moved to Le Center and owned and operated Coast to Coast Hardware until retiring in 1987. After Roy passed away on March 19, 2005, Leona moved back to Marshall. Leona passed away at the Colonial Manor Care Center in Balaton on Wednesday, December 29, 2010. She had reached the age of 89 years and 25 days. Leona is survived by her three children, Bob (and Mary), of Brandon, Denny, of Marshall, and Sheri (and Tom) Wagner, of Westchester, IL; five grandchildren, Brian (and Kelly), Amy, and Mike (Jody) Hefti, and Tim (Jackie) and Dan (Danielle) Wagner; and four great-grandchildren, Jayke, Derit,Kate Hefti and Mason Wagner. She was preceded in death by her parents; husband, Roy; infant daughter, Linda; sister, Margie Christiansen; and infant sister. Leona’s enjoyments included coffee with friends, sewing, hardanger, crocheting, reading, traveling around the United States with friends and spending time with her family. Leona’s kind and loving personality will be missed by the lives she touched. Leona’s faith was always important to her. She was a charter member of St. Stephen Lutheran Church. She was always involved in many church activities and while at St. Paul’s Lutheran Church she helped make the church banners. Please designate memorials to St. Stephen Lutheran Church or Colonial Manor Activities Department. Blessed Be The Memory of Leona R. Hefti.

The family of Leona R. Hefti created this Life Tributes page to make it easy to share your memories.