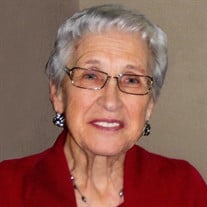 Leona Koelewyn, age 88, of Leota, Minnesota, died on Wednesday, October 9, 2019, at the Good Samaritan Society in Pipestone, Minnesota. Funeral Services are 11:00 a.m. Saturday, October 19, 2019, at the Ebenezer Christian Reformed Church in Leota, Minnesota. Interment will be in the Leota Community Cemetery with a reception to follow in the church basement. Visitation will be held one hour prior to the service, from 10:00 a.m. – 11:00 a.m. on Saturday, October 19, 2019, at the church. Leona De Kam was born on July 31, 1931, in a newly built chicken coop on the family farm in Osborne Township, Minnesota as the family home had recently burned down. She was one of 7 children born to Douwa and Ella (Vanden Bosch) De Kam. Leona was baptized as an infant and made her profession of faith on May 28, 1950, at Ebenezer Christian Reformed Church in Leota. She attended elementary school at the Leota Christian School before helping her folks on the farm and cleaning houses for neighbors, relatives and friends. On October 25, 1950, Leona was united in marriage to Frank Koelewyn at the Ebenezer Christian Reformed Church in Leota. Frank was drafted into the United States Army in 1951. He was stationed in Fairbanks, Alaska, and Leona joined him there and they lived there until December,1953. In 1953, they came back to Minnesota where they began their lifetime of farming, first on the family farm and then ten years later they bought their own farm Southwest of Leota where they lived most of their lives and raised 4 children: Anne, Fred, Scott, and Kari. Leona was a proud mother, farm wife, and caregiver for others in the community. In 2008, Leona and Frank moved into Edgerton and then 6 years later, they moved into Edgebrook Assisted Living. She and Frank shared over 63 years of marriage before Frank died in April of 2014. As she needed more assistance with her care, Leona entered the Good Samaritan Society in Pipestone in 2017. Leona was a lifetime member of Ebenezer Christian Reformed Church and active in the Golden Hour Circle. She also volunteered at the Thrift Store supporting Bibles for Missions. Her enjoyments in life included crafts, sewing, crocheting, cleaning, pulling a prank on someone, and keeping Frank up to speed on what she thought. She was always up for a hand of Pinochle, Rook, or Rummikub and made sure all her family had a bean-bag chair and a crocheted afghan keepsake, she even started making baby blankets for the latest family additions. Leona entered her Heavenly home on Wednesday, October 9, 2019, at the age of 88 years, 2 months, and 9 days. Blessed be her memory. She is survived by her children, Anne (and Carlton) Moore of Chanhassen, MN, Fred (and Darla) Koelewyn of Plano, TX, Scott (and Pam) Koelewyn of Harrisburg, SD, Kari (and Ivan) Bouw of Edgerton, MN; 13 grandchildren, Corey (and Sarah) Moore, David (and Elly) Sprik, Andrea (and Aaron) Aaserude, Wendy (and Joe) Kenney, Lisa (and Keifer) Honey, Josh (and Amy) Koelewyn, Sarah (and Mike) Phillips, Spencer Koelewyn, Taylor Koelewyn, Chelsey (and Zachary) Cordell, Jordan (and Katelyn) Bouw, Jonathan (and Jessica) Bouw, Cody Bouw; 16 great-grandchildren; siblings-in-law, Stan (and Shirley) Osenga of Temple, TX, Tracy De Kam of Ruthton, MN, Carol De Kam of Leota, MN, Alberta De Kam of Lynden, WA; nephews, nieces, other relatives and many friends. Leona is preceded in death by her parents, Douwa and Ella De Kam; husband, Frank Koelewyn; grandson, Zachary Koelewyn; son-in-law, Brian “Bernie” Schaap; and 6 siblings, Peter De Kam, Judy Osenga, Arnold De Kam, Caroline Kalsbeck, Duane De Kam, and Vernon De Kam.

The family of Leona Koelewyn created this Life Tributes page to make it easy to share your memories.

Send flowers to the Koelewyn family.