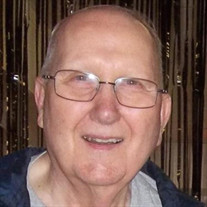 Al Holland, age 81, of Marshall, Minnesota, died surrounded by his family on Wednesday, December 2, 2020, at his home. Funeral Services are 2:00 p.m. Wednesday, December 9, 2020, at Living Word Lutheran Church in Marshall, Minnesota. Interment will follow in the Marshall Cemetery. A walk-through visitation will be held from 5:00 – 7:00 p.m. Tuesday, December 8, 2020, at Living Word Lutheran Church in Marshall. The evening concludes with a Prayer Service at 7:00 p.m. Visitation will continue one hour prior to the service, from 1:00 – 2:00 p.m., on Wednesday, again at the church. Occupancy limits and social distancing must be observed throughout all services. Masks are required at all public indoor gatherings. Leonard “Al” Allan Holland was born January 3, 1939 in Forest City, Iowa, to Frances (Nolte) and Leonard Holland. He enjoyed an idyllic childhood in a small town, growing up with family, cousins, grandparents and friends in Leland, Iowa. Adventurous at heart, he and his friends had many stories of mischief and nostalgia while growing up. He graduated from Forest City High School and enlisted in the US Navy Air where he served for four years. Al married Judy Lindeman on December 17, 1960, in Albert Lea, Minnesota. They made their home in Albert Lea, followed by Austin, Granite Falls, and then Marshall where they raised two sons, Craig and Bryan, and daughter, Michelle. During his early career, Al worked at a credit union, and as a manager for Tempo stores. His last role prior to retirement was circulation manager for the Minneapolis Star Tribune, where he gave 30 years of service. Al had many interests and enjoyed collecting and learning about history, especially war history. For years he worked on and restored old cars. He also was a fan of model railroads, old phonographs, and items of historical significance. He enjoyed visiting over a cup of coffee and sharing stories with others. Al was a part of the early formation of Living Word Church in Marshall. He was actively involved in various mission projects and was instrumental in the church’s service project of locating and delivering beds and household items for those in need. His grace and love for others extended to his work with Compassion International, where he sponsored numerous children in impoverished countries. He was an inspiration to others in how he lived his life and served the Lord. Al enjoyed traveling and took several leisure and mission trips with family and friends to Ecuador, Peru, Russia, and Africa, as well as across the United States. He created a lasting impression with friends across the world. He was a loving husband and father and took great pride and joy in his grandchildren. After a cancer diagnosis in November, he spent his final days at home in hospice care where he was surrounded by the loving care of his family. Al is survived by his wife, Judy Holland; son, Craig (Deann) Holland and their children Elliot and Josie; son, Bryan (Kristen) Holland and their daughter, Gia; daughter, Michelle Holland and her daughters, Jessica, Emma, Makayla, and Brianna; sister, Sharon (Steve) Roberts; aunt, Jane Taylor; sisters-in-law, Carol (Ed) Jessen, Colleen (Ron) Jahnke, Mary Larsen; as well as many cousins, nieces and nephews. He was preceded in death by his parents, Leonard and Frances; mother- and father-in-law, Harry and Pearl Lindemann; brothers, Ronnie and Larry; uncles, Dale and Marlin Nolte; and brother-in-law, Dave Larsen.

The family of Leonard "Al" Holland created this Life Tributes page to make it easy to share your memories.

Send flowers to the Holland family.