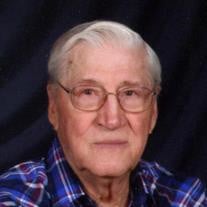 Leonard Yonker, age 88, of Milroy, Minnesota, passed away on Wednesday, June 22, 2016, at the Avera Heart Hospital in Sioux Falls, South Dakota. Memorial Services are 11:00 AM Tuesday, June 28, 2016, at Our Savior’s Lutheran Church in Milroy. Interment will take place at a later date in Ft. Snelling National Cemetery. Visitation will be from 4:00 – 7:00 PM Monday, June 27, 2016, at Our Savior’s Lutheran Church in Milroy. Visitation will continue one hour prior to the service, from 10:00 –11:00 AM, on Tuesday again at the church. Clergy Officiating: Rev. Juanita Harberts & David Rojas Organist: Sharri VanDeWiele Congregational Hymns: Shall We Gather At The River / On Eagle’s Wings Special Music: Barb Wixon – soloist, Old Rugged Cross Military Honors: Milroy American Legion, Post #274 Leonard LeRoy Yonker was born on November 8, 1927, in Madison, Minnesota. He was one of 10 children born to Otto Benjamin and Agnes Marie (Fehland) Yonker. Leonard attended school in Bellingham before moving to Lake Benton in 1944 and then joining the United States Navy in 1945. He served in the Asiatic Pacific and returned home 2 years later with his honorable discharge to drive truck. On October 8, 1950, Leonard was united in marriage to Darlene Lemburg at Peace Evangelical Church in Elkton, South Dakota. The couple made their home in Hayward, Wisconsin, where Leonard worked for the telephone and electric company. In 1952, they moved to Luverne, Minnesota, and then to Marshall in 1954. Leonard served as electrical line foreman for the City of Marshall until his retirement in 1985. A few years later, Leonard and Darlene moved to New Franklin, Missouri, for 8 years. The year 1996 saw the couple return to live in Milroy where they still reside. The couple shared over 65 years of marriage together. Leonard was active in the community. He was a life member of the State Fire Department Association, a proud member of the Marshall Fire Department, a Cootie with the Marshall VFW, member of the Milroy American Legion, the NRA, and active in the Redwood River Sportsman’s Club. He loved the outdoors, hunting, and sport shooting. Leonard Yonker passed away on Wednesday, June 22, 2016, at the age of 88 years, 7 months, and 14 days. Blessed be his memory. Leonard is survived by his wife, Darlene Yonker of Milroy; daughter, Kathy (and William) Stahmer of Long Grove, Iowa; granddaughter, Sara Stahmer of Muldrow, Oklahoma; brother, Roy (and Marlene) Yonker of Tyler; sister, Bernice Krog of Lake Benton; many nephews, nieces, other relatives and friends. Leonard is preceded in death by his parents, Otto and Agnes Yonker; seven siblings, Melvin Yonker, Wilbur Yonker, Glenn Yonker, Robert Yonker, Lucille Williams, Vern Yonker, and Verna Nordmeyer.

The family of Leonard LeRoy Yonker created this Life Tributes page to make it easy to share your memories.

Leonard Yonker, age 88, of Milroy, Minnesota, passed away on...

Send flowers to the Yonker family.