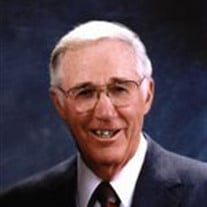 Leslie H. Fawcett, age 82, of Marshall, passed away on Friday, December 28, 2007 at Sanford Sunset Cottage Hospice House in Worthington. Funeral arrangements are scheduled for 10:30 AM on Monday, December 31, 2007 at St. Stephen Lutheran Church in Marshall. Visitation will be on Sunday, December 30, from 4:00 until 7:00 PM with a prayer service at 6:30 PM at the Hamilton Funeral Home in Marshall. Visitation will continue one hour prior to the service on Monday, at the church. Military Honors will be provided by American Legion Post #113. Leslie Fawcett was born to Frank and Sylvia (Munson) Fawcett on January 28, 1925 in Moorhead, Minnesota. He was baptized and confirmed at Bethesda Lutheran Church in Moorhead. He graduated from Moorhead High School in 1943 and then entered the service. He was in the United States Army from 1943-1946, during World War II. He was awarded the bronze star. He was a member of the American Legion for 61 years. Upon returning home, he worked for 4 years as an apprentice machinist on the N.P. railway, working withboth steam and diesel engines. He also served the Moorhead Fire Department for 2 years. On March 3, 1950, Les was united in marriage to Dorraine Durling in Sisseton, South Dakota. He and Dorraine bought Coast-to-Coast stores inH ollsboro, ND, Boone, IA, Grand Forks, ND, and finally Marshall, MN. Les's enjoyments in life were golfing, woodworking, traveling to all 48 states with the motorhome, fishing, hunting, flying, singing in church choir for 43 years, Marshall Men's Choir for 22 years, and spending time with family and friends. Leslie passed away in Marshall on Friday, December 28, 2007. He had reached the age of 82 years and 11 months. He is survived by his wife, Dorraine of Marshall; four children, Lynette (and Gary) Lonneman of Rushmore, Frank (and Cindy) Fawcett of Rochester, Seven (and Deb) Fawcett of Coon Rapids, and Connie (and Harlan) Vande Kieft of Rushmore; 12 grandchildren; 6 great-grandchildren; and a sister, Phyllis (and Arvid) Hellem of Moorhead. He was preceded in death by his parents and 2 sisters, Marian "Toots" Fawcett and Lucille Seaburg. Memorials welcome, please designate to St. Stephen Lutheran Church in Marshall. Blessed Be The Memory of Les Fawcett

The family of Leslie H. Fawcett created this Life Tributes page to make it easy to share your memories.

Send flowers to the Fawcett family.