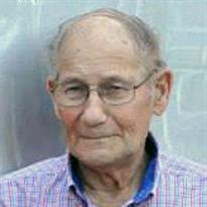 Lester Anderson, age 87, of Marshall, Minnesota, passed away on Saturday, May 28, 2016, at the Avera Marshall Morningside Heights Care Center in Marshall. Memorial Services are 10:30 AM Wednesday, June 1, 2016, at Cornerstone United Methodist Church in Marshall. Following a luncheon, interment will be in the Tracy City Cemetery, Tracy, Minnesota. Traditional Visitation will be from 5:00 – 8:00 PM Tuesday, May 31, 2016, at the Hamilton Funeral Home in Marshall. A prayer service is scheduled for 7:00 PM. Visitation will continue one hour prior to the service, from 9:30 – 10:30 AM, on Wednesday at the church. Clergy Officiating: Rev. David Johnston & Rev. Lori VonHoltum Organist: Sandy Buesing Congregational Hymns: Blessed Assurance / How Great Thou Art (led by Bryan Teachout) / Hymn Of Promise (Accompanied by Lisa Teachout) Special Music: In The Garden – duet, Megan & Austin DeBoer (Accompanied by Lisa Teachout) / Peace In The Valley – CD by Tennessee Ernie Ford Honorary Casket Bearers: Les’ grandchildren ~ Adam Wieme, Erin Bryant, Noah Wieme, Joshua Wieme, Megan DeBoer, Austin DeBoer, Kristy Aldren, Eric Teachout Military Honors: Balaton American Legion, Post #237 Lester Wayne Anderson was born on February 26, 1929 at home near Vilas, South Dakota. He was the son of George and Lois (Collinson) Anderson. Lester was baptized as an infant at the Methodist Church in Howard, SD. Later he was confirmed in his youth at the Methodist Church in Marshall, Minnesota. He attended school in Vilas, and then Lynd, MN before graduating from Tracy High School Class of 1946. As a youth he would ride his pony, Ginger to Marshall for piano lessons from the Catholic Sisters. After school Les stayed home to help his family on the farm near rural Garvin. In 1951 he was drafted into the US Army during the Korean War. He served is country as a clerk typist stationed in Alaska. Upon returning home in 1953 Lester was united in marriage to Shirley J. Edwards on October 24 that same year at the Tracy United Methodist Church where they were members for over 50 years. The couple lived and farmed outside of Garvin. In 1957 Lester lost four fingers from his right hand in a farming accident, but he never let it slow him down. In 1960 the couple moved to a farm on Lake Shetek near Slayton. Shirley and Lester purchased a farm on Hwy 14 near Balaton in 1969. They raised three girls, Julie, Lori and Lisa; and were married over 62 years. Lester farmed and milked cows for over 30 years. During those years he helped the girls with numerous 4-H projects including showing beef and dairy cattle. He AND the girls belonged to the same club, the Garvin Hi-Fliers. In 1986 he retired from farming and worked as a custodian at St. Mary’s Catholic school in Tracy, and the middle school at RTR in Russell. During a few summers and for many Sturgis Rallies he went to the Black Hills helping Lisa at her family’s campground. In 1998 Shirley and Les left the farm and bought a home in Marshall becoming members of the Cornerstone United Methodist Church. June 2002 Les retired completely staying home enjoying his garden, his books, the public library, a few trips, and singing. Singing was truly his love. He sang with his siblings and Dad in a family quartet, the church choirs, the Murray County Barbershoppers, and the Marshall Men’s Chorus. In 1957 Lester had the special privilege of singing in a quartet during church conference at Purdue University. He also loved anything John Deere: tractors, toys, blankets, and a visit to the factory. You could find Lester every nice warm morning out on the deck enjoying his coffee! Lester Anderson went to his heavenly home on Saturday, May 28, 2016, at the age of 87 years, 3 months, and 2 days. Blessed be his memory. Les is survived by his wife, Shirley Anderson of Marshall; three daughters, Julie (and Dale) Wieme of Ruthton, Lori (and LaRon) DeBoer of Brookings, SD, Lisa (and Bryan) Teachout of Rapid City, SD; 8 grandchildren, Adam Wieme (and Brook Albright) of Tyler, Erin (and Shane) Bryant of Beresford, SD, Noah (and Anne) Wieme of Tyler, Joshua (and Briana) Wieme of Tyler, Megan DeBoer (and Anthony Wahl) of Sioux Falls, SD, Austin (and Megan) DeBoer of Ballwin, MO, Kristy (and Todd) Aldren of Rapid City, SD, Eric Teachout of Northfield; 11 great-grandchildren, Kalea, Teagan, Jase, Ashton, Jozilyn, Drake, Gavin, Jaelyn, Kamden, Jilian, Jonah; nephews, nieces, other relatives and many friends. Les is preceded in death by his parents, George and Lois Anderson; siblings, Ethel (and Elmer) Scheer, Harold (and Myrna) Anderson, Iris (and Marvin) Zimmerman, and Leland (and Iverne and then Marge) Anderson.

The family of Lester Wayne Anderson created this Life Tributes page to make it easy to share your memories.