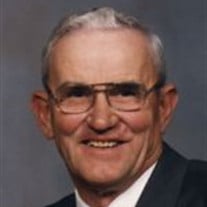 Lewis E. Wewetzer, age 76, of Island Lake Township, passed away at Avera McKennan Hospital in Sioux Falls on Monday, July 2, 2007. Funeral services will be 2:00 P.M. Sunday, July 8, 2007 at First Lutheran Church. Burial will be in the Marshall Cemetery. Visitation will be 4:00 P.M. to 8:00 P.M. with a 7:00 P.M. prayer service Saturday at the Hamilton Funeral Home. Visitation will continue at the church on Sunday, one hour prior to the service. Lewis Eugene Wewetzer ws born to Lewis Josiah and Hattie Marie (Fixen) Wewetzer on July 3, 1930 in Marshall. He graduated from the Lynd public School in 1948. On April 13, 1957 Lewis was united in marriage to Bernice Williams at the Salem Lutheran Church in Jackson, MN. He and his family farmed the homestead farm until he retired in 2004. Along with farming, Lewis was the Island Lake assesor, monitored rainfall and was on the Soil Conservation board. His enjoyments included fishing and hunting with his sons and family, watching football and other sports, the outdoors, gardening and being with people. Lewis passed away at the Avera McKennan Hospital in Sioux Falls on Monday, July 2, 2007. He had rached the age of 76 years, 11 months and 30 days. He is survived by his wife, Bernice ³Bea² of Lynd, five sons, Dean (Nativida, ³Katie²) of Newport Beach, VA, Randy (Sima) of Lynd, Michael (Karen) Sun Prairie, WI, Ricard (Diana) Pastaskala, OH and Jeffrey (Jamie) of Franklin, TN; five grandsons, Christopher aul, Jessie Lewis, Kyle Lewis, Nathan Eugene and Nicholas Brandon Wewetzer; and three sisters, Lois Miller and Audrey (Harlan) Miller of Marshall and Peggy (Glen) Wilson of Willmar. He was preceded in death by his parents and infant sister, Lillian. Lewis was a faithful member of the First Lutheran Church where he taught Sunday School and ushered. Blessed Be His Memory

The family of Lewis E. Wewetzer created this Life Tributes page to make it easy to share your memories.

Send flowers to the Wewetzer family.