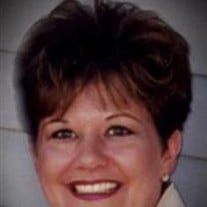 Marshall: Linda M. Bach, age 55, of Marshall, Minnesota, passed away at the Prairie Home Hospice Home in Marshall on Tuesday, September 17th. Mass of Christian Burial will be at 10:30 A.M. Saturday, September 21st at Holy Redeemer Catholic Church in Marshall. Visitation will be 9:00 A.M. until the time of the mass at church. Immediately following the mass, there will be a Celebration of Life at the Southwest Minnesota State University Conference Center, Lower Ballroom. Linda Marie was born on March 16, 1958 in Alhambra, CA to Raymond and Evelyn (Joanning) Pfarr. She was baptized at St. Therese Catholic Church in Alhambra. While Linda was young, she and her family moved to Arlington, MN where she received First Communion and was later confirmed at St. Mary’s Catholic Church. She graduated from Arlington High School in 1976 and went on to receive her LPN degree from Faribault Community Technical College in 1979. Linda was employed as an LPN at the Gaylord Hospital when she met Steve Bach. They met for the first time on the old Mattke Field at SMSU in Marshall. They were married at St. Mary’s Catholic Church in Arlington on June 4, 1983. To this union two children were born, namely, Collene and Joseph. Linda and her family lived in Arlington, and she worked at the Fairview Clinic in Edina, MN for a few years before moving to Albia, IA. While living there, Linda decided to do what whe enjoyed the most and opened a daycare. After relocating to Carver, MN she worked for the State of MN at the Carver County Court Administrations office. The family moved to Yankton, SD where she was employed in the City Administration Office and Mount Marty College. The family returned to Victoria, Minnesota where Linda returned to worked for the Carver County Court Administration Office. In 2008, Linda and her family moved to Marshall, where she was currently employed at the SMSU Physical Plant as Office Administrative Specialist Senior. Linda is survived by her husband Steve of Marshall; two children, Collene Bach of Marshall and Joe (Margie) Bach of Mankato; three siblings, Patricia (Tim) Brown of Waseca, Tom (Lisa) Pfarr of Arlington, and Mary (Brian) Paul of Elysian; brother-in-law, Tom Macy of Washington, DC ; father and mother-in-law, Roman and Gertie Bach of Canby; brother and sister-in-laws, Marian Bach of St. Cloud, Karen (Milo “Buddy”) Hovland of Yankton, SD, Jeff and Jerry Bach of Canby, Connie (Jason) Becker of Sioux Falls, SD, Tammy (Dan) Willis of Marietta and Stephanie (Al) Grey of Sioux Falls, SD; also many aunts, uncles, cousins, nieces, nephews, and many dear friends. Linda was preceded in death by her parents and two siblings, Kathleen Macy and Diane Pfarr, grandparents and numerous aunts and uncles. Blessed be the memory of Linda M. Bach.

The family of Linda Marie Bach created this Life Tributes page to make it easy to share your memories.

Send flowers to the Bach family.